All NewsBusiness, Financial & LegalCases, Cooling & PSUContests & GiveawaysCPU, APU & ChipsetsDealsDisplays & ProjectorsGamingMotherboardsScience, Space & RoboticsStorageVideo CardsVirtual & Augmented Reality
All ReviewsAll ArticlesAudio, Sound & SpeakersCases, Cooling & PSUCPUs, Chipsets & SoCsComputer SystemsDisplays & ProjectorsGamingMotherboardsNetworkingPeripheralsRAMStorageVideo Cards
GuidesGamingAsk the ExpertsNewsletterAboutForums
RTX 3090 TiRTX 4090Diablo 2GTA 6Halo InfiniteElon MuskRTX 3080HDMI 2.1
Sony was one of the early entries into the market for interchangeable lens cameras that aren't DSLR offerings like micro four-thirds cameras. Sony has announced that it is adding new features to the NEX-5 and NEX-3 digital cameras that will make them better and easier to use for owners. It's nice to see that camera markers like Sony are adding new features via firmware updates today rather than just tossing a camera out and leaving new features for newer models. 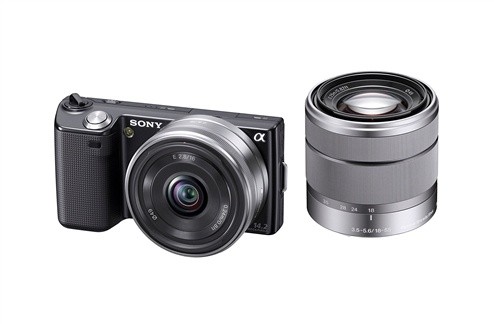 Sony has announced a new firmware that works with the NEX-5 and NEX-3 digital cameras. The update is available for download right now with versions for Mac and Windows PCs available. The update adds support for autofocus for 14 new Sony lenses including the entire range of A-mount optics by Sony and Carl Zeiss. That range of lenses includes telephotos, primes, and zoom lenses. The update also brings new aperture settings.

The aperture settings can now be maintained when the users is recording HD video in video mode with the camera. The operation of the system menus has also been simplified and streamlined as well as several other utility improvements being made. One of the other changes the firmware brings with it is soft key settings that allow users to customize functions for the camera to two of the three soft keys on the rear of the cams. The update also adds a menu start option to display either the main menu screen or the last parameter set. It is worth noting that support for autofocus using the LA-EA1 lens requires a separate firmware update as well.
NEWS SOURCE:presscentre.sony.eu