All NewsBusiness, Financial & LegalCases, Cooling & PSUContests & GiveawaysCPU, APU & ChipsetsDealsDisplays & ProjectorsGamingMotherboardsScience, Space & RoboticsStorageVideo CardsVirtual & Augmented Reality
All ReviewsAll ArticlesAudio, Sound & SpeakersCases, Cooling & PSUCPUs, Chipsets & SoCsComputer SystemsDisplays & ProjectorsGamingMotherboardsNetworkingPeripheralsStorageVideo Cards
GuidesGamingAsk the ExpertsNewsletterAboutForums
One of the first companies into the micro four-thirds camera market was Panasonic. These cameras offer DSLR quality images and interchangeable lenses in much more compact designs. The downside is that the cameras cost more than many DSLRs that are on the market. Panasonic has expanded its range of Lumix G series cameras with a new Lumix GH2. 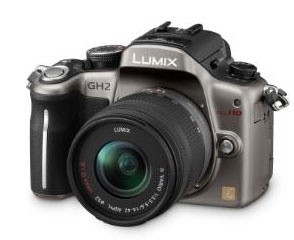 The new camera has a 14MP resolution and can shoot 1080p video at 24 fps and has support for 50p and 60p settings as well. Several video modes are included like a Cinema mode that makes video look more cinematic. The camera also has variable movie mode that will speed or slow frames by 80%, 160%, 200%, or 300%.

Other features include a 3-inch tilting rear LCD that is touch sensitive. The camera can record digital audio with an accessory microphone. Other features include HDMI out and numerous automatic and manual photo and video modes. The camera will launch in early December with the body only for $899.95, the body and a 14-42mm lens for $999.95, and the body with a 14-140mm lens for $1499.95.
NEWS SOURCE:www2.panasonic.com