All NewsBusiness, Financial & LegalCases, Cooling & PSUContests & GiveawaysCPU, APU & ChipsetsDealsDisplays & ProjectorsGamingMotherboardsScience, Space, Health & RoboticsStorageVideo Cards & GPUsVirtual & Augmented Reality
All ReviewsAll ArticlesAudio, Sound & SpeakersCases, Cooling & PSUCPUs, Chipsets & SoCsComputer SystemsDisplays & ProjectorsGamingMotherboardsNetworkingPeripheralsRAMStorageVideo Cards & GPUs
GuidesGamingAsk the ExpertsNewsletterAboutPrivacyForums
AMD Zen 4Intel ArcBattlefield 2042RTX 3090 TiRTX 4090RTX 4080GTA 6Elon MuskHDMI 2.1
Mobile Devices
Paul Jacobs, the CEO of Qualcomm, spoke at the IQ 2010 event in London, England today and cleared up a few rumors. He stated that the 1.5 Ghz Snapdragon processors will be are available and we should be seeing them in device early next year. There was even a demo of a game called ilomilo running on a device boasting the new Snapdragon processor.


When asked about the dual-core chips, Jacobs replied that they would be ready sometime in the first half of 2011. These processors will be going head to head with devices sporting the Tegra 2 platform from NVIDIA and Intel's Moorestown. Tablets and smartphones should definitely be seeing a huge boost in power from these new platforms, and with them planning to be released so close together, hopefully that means we will see competitive prices as the companies battle for our hard earned dollars. 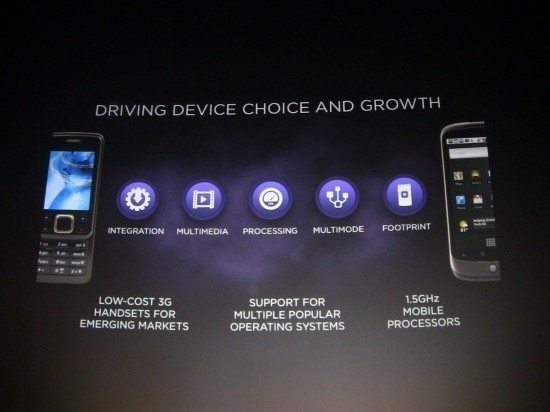