All NewsBusiness, Financial & LegalCases, Cooling & PSUContests & GiveawaysCPU, APU & ChipsetsDealsDisplays & ProjectorsGamingMotherboardsScience, Space & RoboticsStorageVideo CardsVirtual & Augmented Reality
All ReviewsAll ArticlesAudio, Sound & SpeakersCases, Cooling & PSUCPUs, Chipsets & SoCsComputer SystemsDisplays & ProjectorsGamingMotherboardsNetworkingPeripheralsStorageVideo Cards
GuidesGamingAsk the ExpertsNewsletterAboutForums
RTX 4090Windows 11Halo InfiniteBattlefield 2042Elon MuskGTA 6RTX 3080HDMI 2.1
Mobile Devices
Looking for the next big jump in smartphone processing power? It may be coming sooner than you think. Qualcomm's VP Mark Frankel stated that their dual-core Snapdragon processors with clock speeds up to 1.5GHz have been shipped to manufacturers and we could be seeing them in smartphones and tablets as early as the end of this year. 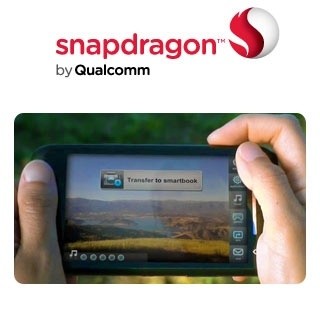 The 45nm QSD8672 Snapdragon has two cores that can each be used independently and could possibly improve battery life up to 30% over their single core predecessors. These chips also allow for full 1080p playback which will be great on the tablet front. It is expected that HTC will be at the front of the line to bring devices with the new dual-core processor due to their strong ties with Qualcomm.
NEWS SOURCE:phonearena.com
Newsletter Subscription