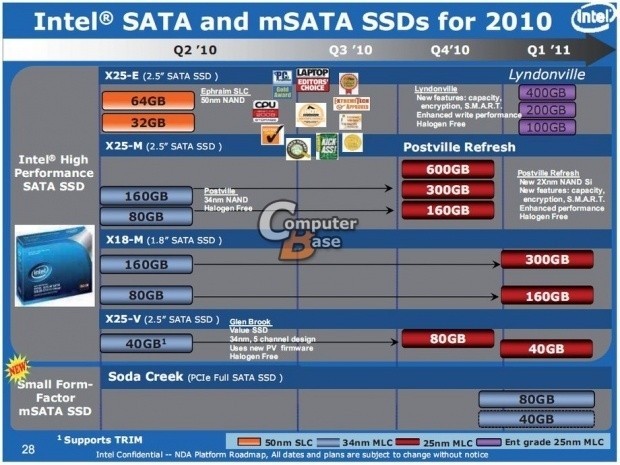 The four drives will span across their X25-M and X18-M (mainstream) as well as the X25-V (value) lineups. The same feature set will be given to the new drives as the existing 34nm 'Postville' drives except for a few additions; native data encryption, SMART and of course higher performance from the new 25nm NAND flash chips.

Looking at the most popular X25-M drives, a roadmap reveals capacities of 160, 300 and 600GB coming, while the X25-V(alue) will see the launch of an 80GB 25nm drive. When looking further on into 2011, Intel is planning some new enterprise level (X25-E / 'Lydonville') models using the new 25nm NAND chips and around the same time it will release its new X18-M series coming in 40GB, 160GB and 300GB capacities.
NEWS SOURCE:computerbase.de
Newsletter Subscription