All NewsBusiness, Financial & LegalCases, Cooling & PSUContests & GiveawaysCPU, APU & ChipsetsDealsDisplays & ProjectorsGamingMotherboardsScience, Space, Health & RoboticsStorageVideo Cards & GPUsVirtual & Augmented Reality
All ReviewsAll ArticlesAudio, Sound & SpeakersCases, Cooling & PSUCPUs, Chipsets & SoCsComputer SystemsDisplays & ProjectorsGamingMotherboardsNetworkingPeripheralsRAMStorageVideo Cards & GPUs
GuidesGamingAsk the ExpertsNewsletterAboutPrivacyForums
AMD Zen 4Intel ArcBattlefield 2042RTX 3090 TiRTX 4090RTX 4080GTA 6Elon MuskHDMI 2.1
Motherboards
I think the thing that most gamers and computer enthusiasts expect from their hardware to start with is performance. If we have more than one option offering the same performance and one looks cooler, it's usually a no brainer to buy the good looking schwag. This is especially true if you are using a PC chassis with windows. ECS has unveiled a cool looking new mainboard called the P55H-AK. 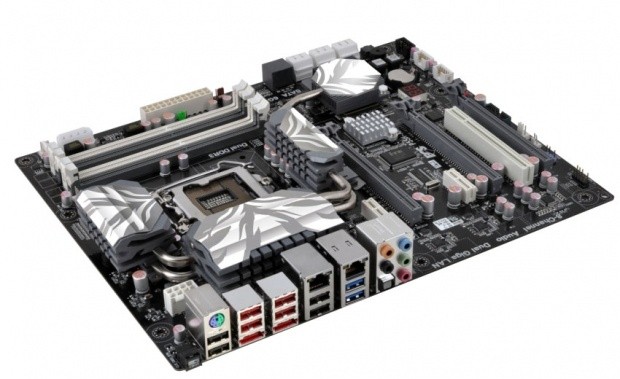 The mainboard is aimed directly at the hardcore gamer and enthusiast and has a slick design that is black and white in color. This is one of the best looking mainboards I have seen. The big feature of the board isn't the good looks though; it's the performance and overclocking promise. The board is designed to deliver massive overclocking potential to the enthusiast.

ECS claims that the board is capable of overclocking Intel's latest processors all the way up to the 5GHz mark with a normal air cooler. The board uses the NVIDIA NF200 chipset that offers support for both 3-way SLI and CrossFireX. The board also supports DDR3-2600+ RAM. Other features include SATA 6G ports and an eSATA 6G port powered by a Marvell chipset. The board also has four USB 3.0 ports that are powered by a NEC USB 3.0 controller chip. The board is a limited edition and is available right now.
NEWS SOURCE:ecs.com.tw