All NewsBusiness, Financial & LegalCases, Cooling & PSUContests & GiveawaysCPU, APU & ChipsetsDealsDisplays & ProjectorsGamingMotherboardsScience, Space & RoboticsStorageVideo CardsVirtual & Augmented Reality
All ReviewsAll ArticlesAudio, Sound & SpeakersCases, Cooling & PSUCPUs, Chipsets & SoCsComputer SystemsDisplays & ProjectorsGamingMotherboardsNetworkingPeripheralsStorageVideo Cards
GuidesGamingAsk the ExpertsNewsletterAboutForums
Gaming
Between my brother and I, we had all of the major game systems at one time or another growing up. We really liked the original Nintendo, the SNES, and the Sega Genesis. If you still have games and controllers lying around from those systems, the RetroN 3 is for you. 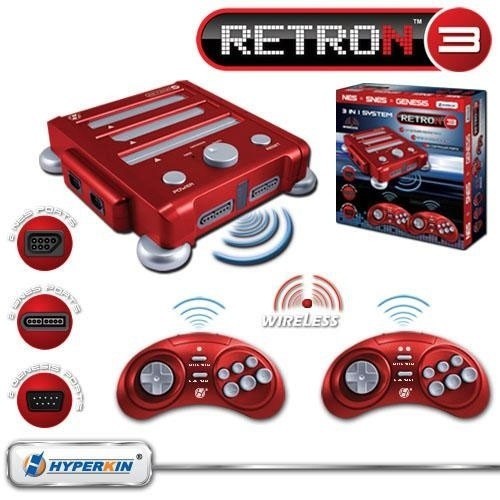 The RetroN 3 is a game console that can play cartridges from all three of those old systems and has ports to let you use the original controllers for gaming. The system also ships with a pair of wireless controls.

You can pick one up in either red or black colors. The system is downright cheap at $69.99. This is a great way to get some use out of those games you have even if you lost your controllers or your console is broken.
NEWS SOURCE:hyperkin.com