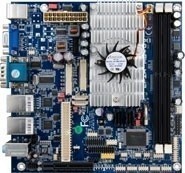 It packs in a Via NANO E-series CPU running at 1.6GHz. The machine also has a VIA VX800 media system processor and can support two DDR2 DIMMS for memory.

The small mainboard has passive and active cooling to keep it frosty. Other features include integrated Via Chrome9 graphics, and support for VGA and dual channel LVDS displays. The board has four PCIe slots and six USB ports.
NEWS SOURCE:via.com.tw