All NewsBusiness, Financial & LegalCases, Cooling & PSUContests & GiveawaysCPU, APU & ChipsetsDealsDisplays & ProjectorsGamingMotherboardsScience, Space & RoboticsStorageVideo CardsVirtual & Augmented Reality
All ReviewsAll ArticlesAudio, Sound & SpeakersCases, Cooling & PSUCPUs, Chipsets & SoCsComputer SystemsDisplays & ProjectorsGamingMotherboardsNetworkingPeripheralsStorageVideo Cards
GuidesGamingAsk the ExpertsNewsletterAboutForums
RTX 4090Windows 11Halo InfiniteBattlefield 2042Elon MuskGTA 6RTX 3080HDMI 2.1
Storage
COMPUTEX Taipei 2010 - We were able to find one vender who was not too worried about breaking an NDA with SandForce at Computex 2010. Here you can see the SandForce Phoenix (Client Version) controller specs in the newly shown PhotoFast GMonster2 SFV 2. Most of the info you want to see if shown right in the picture. 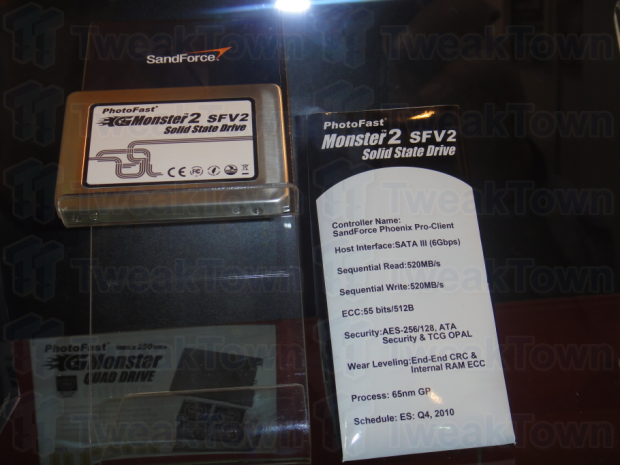 Just check out those specs, 520MB/s read and 520MB/s write when used with SATA 6G. It looks like engineering samples will be ready in Q4 so we are thinking the launch may come around CeBIT next year. That is all pure speculation at this point though. No official word from anyone looking to keep in good standing with SandForce and PhotoFast has removed the drive from their booth, most likely at the request of SandForce.
Newsletter Subscription