All NewsBusiness, Financial & LegalCases, Cooling & PSUContests & GiveawaysCPU, APU & ChipsetsDealsDisplays & ProjectorsGamingMotherboardsScience, Space & RoboticsStorageVideo CardsVirtual & Augmented Reality
All ReviewsAll ArticlesAudio, Sound & SpeakersCases, Cooling & PSUCPUs, Chipsets & SoCsComputer SystemsDisplays & ProjectorsGamingMotherboardsNetworkingPeripheralsStorageVideo Cards
GuidesGamingAsk the ExpertsNewsletterAboutForums
Computer Systems
Asus has been peddling that slick Rampage III Extreme mainboard for Intel CPUs for a while now. The board is packed with just about every feature that you could possibly need on a mainboard. Asus has announced that it used a machine based on the Rampage III Extreme to kill some benchmark records. 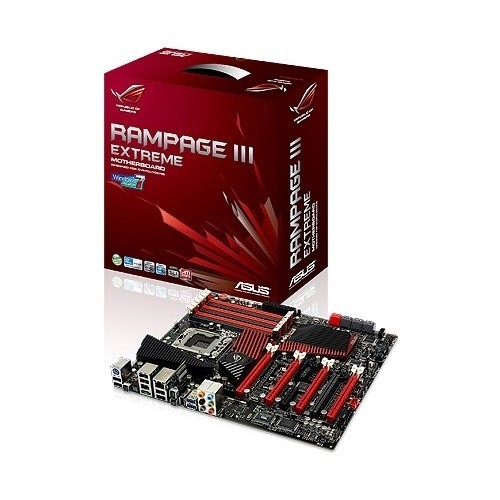 The PC ran the aforementioned mainboard, an Intel Core i7-980X CPU, GTX 465 video card and an ATI Radeon 5870 chipset 5870 Matrix Platinum. The machine was overclocked to the gills and then blitzed records on 3DMark Vantage and older versions of the benchmark.

The machine scored 51,410 in 3DMark Vantage with high preset on and 39,212 in the same benchmark with the extreme preset on. It's interesting that the machine beat out a dual CPU rig to get the record.
NEWS SOURCE:asus.com