NewsReviewsArticlesGuidesGamingAsk the ExpertsNewsletterForums
Video Cards
The next generation 3DMark benchmarking suite isn't all that far away with FutureMark planning for a Q3, 2010 launch. Some new details have come to light which gives one particularly promising piece of information, or should I say, lack of; no mention of PhysX!

The inclusion of PhysX support in Vantage was disliked by many due to its proprietory nature favouring NVIDIA. Sticking to open industry standard features this time around that are available across all DirectX 11 based graphics cards (with primary focus on new texturing and hardware tessellation features) makes for a nice even playing field that 3DMark has been much loved for in past releases. 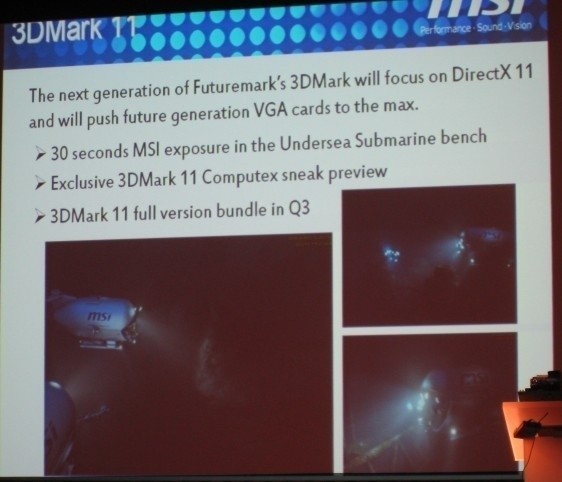 Little is known yet about the main theme FutureMark are basing "3DMark 11" on, but one of the game test names have been mentioned, called "Undersea Submarine". FutureMark is also giving MSI some special loving this time around, where Sapphire was the lucky one in Vantage; you could spot a futuristic vehicle with the Sapphire logo on it in one of the game tests). MSI video cards will also be bundled with the new 3DMark once it's released.

FutureMark is readying up a demonstration of it in time for Computex early next month.
NEWS SOURCE:techpowerup.com