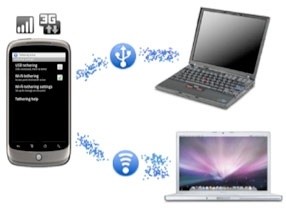 Google's I/O conference in California promised t be a hotspot for tech junkies with a lot of announcements, and they did not disappoint. Today Google officially announced the release of Android 2.2, codenamed "Froyo." A lot has been leaked about the speed and features of Android's newest OS but nothing had been made official until today.

Google, stating today that their partners were selling 100,000 new handsets per day, verified a lot of the rumors about Froyo's functionality. They reported it would be the world's fastest mobile browser, ensured Adobe Flash 10.1 support, the ability to make an Android phone a WiFi hotspot, and data tethering. The new V8 Javascript engine, compiler, and APIs and services will give developers plenty of fun new toys to tinker with.

The SDK is going out to developers today but there is no ETA for when consumers will be able to get their phones upgraded. With some phones like the Hero just now joining the Android 2.1 fray, hopefully Froyo's implementation will not be so long and drawn out.