NewsReviewsArticlesGuidesGamingAsk the ExpertsNewsletterForums
Gaming
I think the coaches got a sick thrill out of seeing the smaller kids get pounded by the bigger kids at dodgeball in middle school. It always seemed like someone was aiming for your nads too. Samsung has set a new world record for the largest game of dodgeball ever. 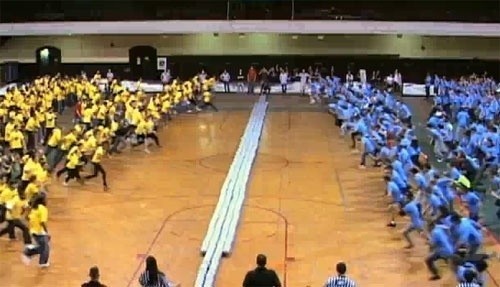 The game was certified by the Guinness World Record people with a game of two teams with 712 players total. The game had 600 dodgeballs in play. I can't imagine the carnage that the initial volley caused, talk about a target rich environment. I bet one throw took out ten geeks.

The record setting game was held to celebrate the launch of the Samsung Reality on the Verizon network. The game was held in New York City at the 69th Regiment Armory. Ten players from the winning team received Reality phones.
NEWS SOURCE:businesswire.com