All NewsBusiness, Financial & LegalCases, Cooling & PSUContests & GiveawaysCPU, APU & ChipsetsDealsDisplays & ProjectorsGamingMotherboardsScience, Space & RoboticsStorageVideo CardsVirtual & Augmented Reality
All ReviewsAll ArticlesAudio, Sound & SpeakersCases, Cooling & PSUCPUs, Chipsets & SoCsComputer SystemsDisplays & ProjectorsGamingMotherboardsNetworkingPeripheralsStorageVideo Cards
GuidesGamingAsk the ExpertsNewsletterAboutForums
RTX 4090Windows 11Halo InfiniteBattlefield 2042Elon MuskGTA 6RTX 3080HDMI 2.1
Motherboards
Earlier today we were invited down to the GIGABYTE Technology headquarters here in Taipei where we were given an exclusive demonstration of its new "On/Off Charge" technology for the Apple iPod and other Apple products such as the iPhone and iPod. 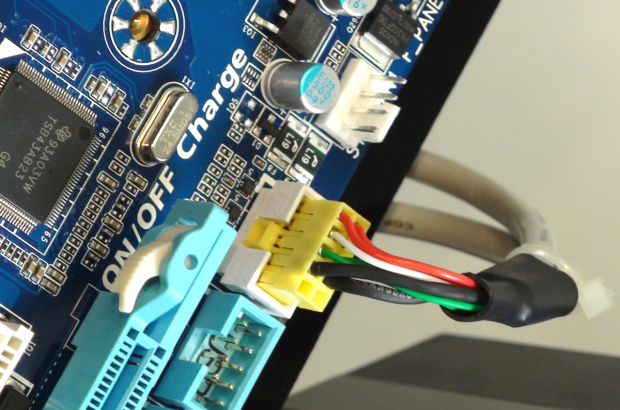 GIGABYTE quietly launched a software driver a little while ago that allowed its motherboards to charge Apple products via USB even when your computer was turned off. Now the Taiwanese motherboard heavyweight steps things up some more with its new On/Off Charge tech.

With this new hardware based solution, the engineers at GIGABYTE have programmed their motherboards to be able to detect what sort of Apple product needs charging and allows for Quick Charging by sending out more power over the 3x USB Power ports on some new GIGABYTE motherboards. This is done by detecting the Apple product device ID on a power supply database and sending out more power than a traditional motherboard (can) - that is, over 0.5 amps. We saw an iPad getting over 0.9 amps, in fact.

Another thing that is new and what GIGABYTE is calling a green technology is the second part of the On/Off Charge technology. Normally with an Apple product, when your computer is turned off, the device will keep charging. However, with your computer still turned off and once you remove the Apple device and plug it back in the same off system state, it will not start charging again.

In the video above that we produced, you can see that there is a new On/Off Charge USB port that will come on many new mid to high-end motherboards from GIGABYTE that allows for full (and quick) charging when your system is off, even when removing and adding the device from USB charging. Sadly not every USB port includes this ability, but probably most importantly, the two front panel ports do.

Boy, GIGABYTE is taking this extra power over USB and Apple products very seriously. What do you think? Comment below!