All NewsBusiness, Financial & LegalCases, Cooling & PSUContests & GiveawaysCPU, APU & ChipsetsDealsDisplays & ProjectorsGamingMotherboardsScience, Space & RoboticsStorageVideo CardsVirtual & Augmented Reality
All ReviewsAll ArticlesAudio, Sound & SpeakersCases, Cooling & PSUCPUs, Chipsets & SoCsComputer SystemsDisplays & ProjectorsGamingMotherboardsNetworkingPeripheralsStorageVideo Cards
GuidesGamingAsk the ExpertsNewsletterAboutForums
Cameras
Kodak is one of the most recognizable names in the photography market, Back when film cameras were the norm, the company made some of the most popular film around. Today Kodak is big in digital imaging and it has added a new camera to its Easyshare line. 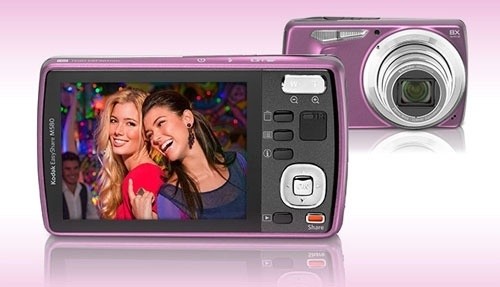 The new camera is called the M580, has an 8X optical zoom, and uses a 28mm wide-angle lens. The camera is designed for easy sharing of photos on social networks and via email. Photos and 720p HD video can be uploaded from the camera to Facebook, YouTube, Flickr, and other sites.

The camera has a 3-inch rear LCD and a 14MP sensor. Image stabilization is built-in along with face recognition. The camera can recognize and tag up to 20 faces and the tags go with the photos to editing software for easier search. The camera will ship on April 23 for $199.95.
NEWS SOURCE:store.kodak.com