All NewsBusiness, Financial & LegalCases, Cooling & PSUContests & GiveawaysCPU, APU & ChipsetsDealsDisplays & ProjectorsGamingMotherboardsScience, Space & RoboticsStorageVideo CardsVirtual & Augmented Reality
All ReviewsAll ArticlesAudio, Sound & SpeakersCases, Cooling & PSUCPUs, Chipsets & SoCsComputer SystemsDisplays & ProjectorsGamingMotherboardsNetworkingPeripheralsStorageVideo Cards
GuidesGamingAsk the ExpertsNewsletterAboutForums
Windows 11Halo InfiniteBattlefield 2042Elon MuskGTA 6RTX 3080HDMI 2.1Bitcoin Mining
Gaming
Rumors surface all the time in the tech world and some are more believable than others. Some rumors start out of the blue and others are based in at least a little bit of fact. The new Sony rumor circulating today has a bit of fact behind it. 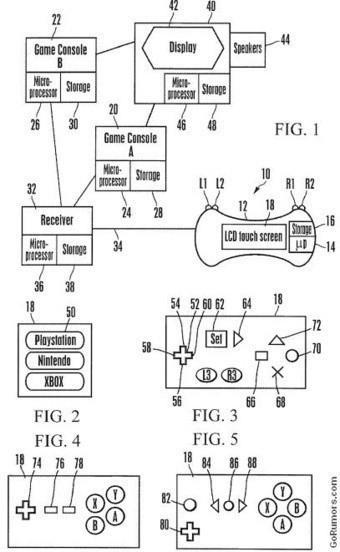 The rumor started when a patent surfaced showing that Sony was at least thinking about creating a universal controller for game consoles. Universal would mean a Sony controller that would work on the Wii, Xbox, and PS3. That hardly sounds like something Sony would do.

The patent outlines a controller with an LCD screen that would be able to show the buttons for specific consoles the device was connected to. The big (BIG) issue here is that the buttons are mostly virtual. I can not imagine that many gamers would want to play with a virtual button control for long.
NEWS SOURCE:gizmodo.com