All NewsBusiness, Financial & LegalCases, Cooling & PSUContests & GiveawaysCPU, APU & ChipsetsDealsDisplays & ProjectorsGamingMotherboardsScience, Space & RoboticsStorageVideo CardsVirtual & Augmented Reality
All ReviewsAll ArticlesAudio, Sound & SpeakersCases, Cooling & PSUCPUs, Chipsets & SoCsComputer SystemsDisplays & ProjectorsGamingMotherboardsNetworkingPeripheralsStorageVideo Cards
GuidesGamingAsk the ExpertsNewsletterAboutForums
RTX 4090Windows 11Halo InfiniteBattlefield 2042Elon MuskGTA 6RTX 3080HDMI 2.1
Storage
SilverStone has come up with an interesting device that works differently to anything else we've seen on the market up until now. The newly release HDDBOOST is designed to give a 'best of both worlds' setup using a traditional mechanical HDD and an SSD. 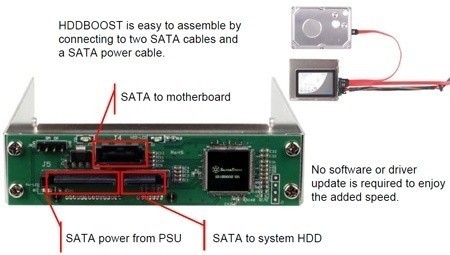 The device itself resides in a 3.5" drive bay in which an SSD can be mounted inside it. Meanwhile, a mechanical HDD can also be connected to the device via a second SATA port which allow the HDD and SSD to talk together in a unique automated way.

Once setup and the system is turned on, the device will mirror the front-end data on the HDD to the SSD so that all of the most commonly used files will be read from the faster flash drive. Unlike simply running an SSD on its own for your operating system drive, this device puts less wear on the drive as any new writes performed will be done to the mechanical HDD. 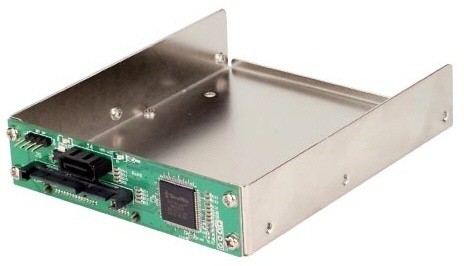 In essence, this is like a hybrid storage setup where an SSD is assigned the task of being a giant cache for the mechanical hard disk. And while the setup might not be as fast as simply running an SSD as a system drive on its own, it's still going to give a significant performance increase whilst also having the benefit of a normal HDDs larger storage capacity.

Still, I don't see how it's a better arrangement over simply running an SSD as your system drive and having a second large capacity HDD connected to your system for storage. To each their own I guess.
NEWS SOURCE:silverstonetek.com
Newsletter Subscription