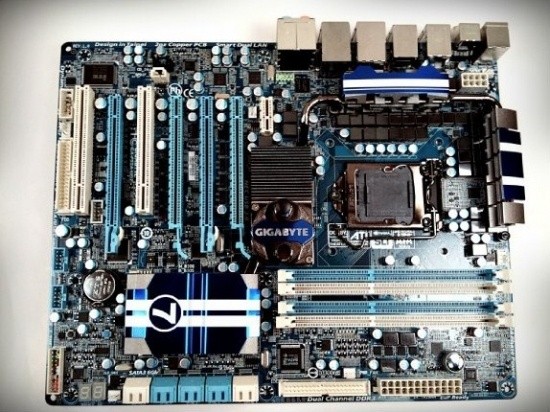 Aside from having both USB 3.0 and SATA 6 Gb/s support, the retail model also has four PCI-E 2.0 x16 slots instead of three on the earlier production model. Further to that is the nuse of NVIDIA's nForce 200 PCI-E bridge chip which provides two x16 links that can be split into four x8 links for each slot. GIGABYTE has also added a PLX-bridge chip to provide additional PCI-E 2.0 lanes that assist the USB 3.0 and SATA 6 Gb/s controllers.

Both the nForce 200 and PLX bridge chips are situated in the same area that would otherwise be used for a Northbridge on older gen motherboards. They are cooled by a fusion heatsink that can be connected to a water-cooling loop and also has the ability to offload heat from the VPU VRM and PCH heatsinks.

There are ten internal SATA ports, six of which are provided by Intel's P55 PCH. Two others are 3 Gb/s ports run off GIGABYTE's own GSATA2 controller (of which this same controller also provides an IDE port onboard), and the final two ports are 6 Gb/s ports controlled by Marvell.