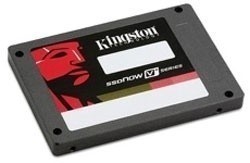 Kingston has unveiled a new version of its SSDNow V series drive that comes in at 30GB capacity. The drive will sell for under $80 after rebates, which makes it one of the cheapest SSDs on the market. At the 30GB size, it will be mostly of use for a boot drive only with bulk storage to a different drive. Kingston will however also be offering the drive as part of a an upgrade bundle and also in a two-pack for those looking to RAID right from the get go.

The SSD has Windows 7 TRIM functionality and promises read speed of 180MB/sec and a write speed of 50MB/sec.
NEWS SOURCE:engadget.com