Some radical changes have been made to this board over its predecessor, the Rampage II Extreme. The biggest and most useful performance oriented change is this board's ability to run up to four double slot NvIDIA or ATI graphics cards with its well spaced out PCI-e 2.0 x16 slots. ASUS ensures there'll be no hindrance in the way of available PCIe lanes by including NVIDIA's nForce 200 chip and PCI bridge to assist in taking on four-card SLI and CrossFire. 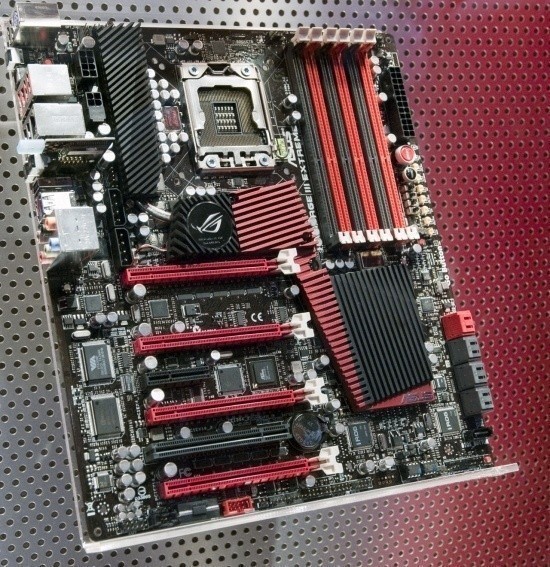 Other enhancements include ROG Connect with the ability to overclock using Bluetooth (mobile phones etc.), discrete SATA 6Gb/s and USB 3.0 controllers which won't affect graphics performance when used unlike other boards, thanks to ASUS' PCI-E 2.0 bridge implementation, a superior CPU VRM setup with super-ML capacitors being used for both the CPU and memory power circuits and slimmer low-profile heatsinks said to be made of ceramic composite which help make the board more adaptable to larger CPU cooling solutions.

The Rampage III Extreme is expected to arrive to market sometime this quarter, with pricing, while not confirmed, sure to be sky high.
NEWS SOURCE:tomshardware.com
Newsletter Subscription