All NewsBusiness, Financial & LegalCases, Cooling & PSUContests & GiveawaysCPU, APU & ChipsetsDealsDisplays & ProjectorsGamingMotherboardsScience, Space & RoboticsStorageVideo CardsVirtual & Augmented Reality
All ReviewsAll ArticlesAudio, Sound & SpeakersCases, Cooling & PSUCPUs, Chipsets & SoCsComputer SystemsDisplays & ProjectorsGamingMotherboardsNetworkingPeripheralsRAMStorageVideo Cards
GuidesGamingAsk the ExpertsNewsletterAboutForums
RTX 3090 TiRTX 4090Diablo 2GTA 6Halo InfiniteElon MuskRTX 3080HDMI 2.1
Motherboards
In what seems to be a flashback to the Lynnfield/P55 launch we now hear that H57 boards from at least one manufacturer are showing up for sale in the Taipei computer market. The culprit this time is the Asus P7H57D-V EVO, the problem? Well the launch for this and the CPUs that support it are not until sometime in January.

What does this mean for Clarkdale and the new H5x chipsets? Well it can go one of two ways really. The first is the worse of the two scenarios as we start seeing Clarkdale Core i5 CPUs hitting the shelves in the same stores in Taipei. At the time of this writing that is not the case. The other is one where the boards hang out and are picked up by those wanting to get an early start on Clarkdale Core i5 and i3 CPUs.

But no matter which way it goes the Asus H57 board is a little higher priced that it should be. It runs for about $240. This is more than many P55 boards will run, but I suppose they are banking on the IGP on the CPU to make the cost seem more logical. The issue still remains that we do not yet know if the IGP on Clarkdale is worth the extra money or not.

For that we will have to wait for the official Clarkdale launch, or for some brave and enterprising website to push out a review early to get some extra page hits before the end of the year. 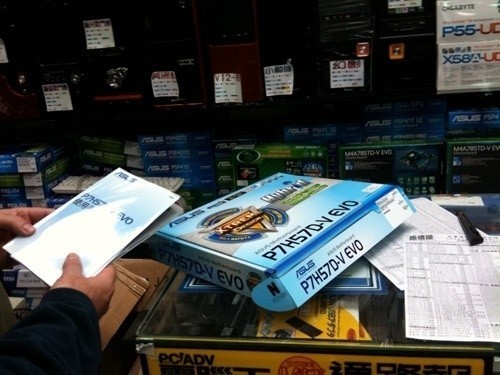