All NewsBusiness, Financial & LegalCases, Cooling & PSUContests & GiveawaysCPU, APU & ChipsetsDealsDisplays & ProjectorsGamingMotherboardsScience, Space & RoboticsStorageVideo CardsVirtual & Augmented Reality
All ReviewsAll ArticlesAudio, Sound & SpeakersCases, Cooling & PSUCPUs, Chipsets & SoCsComputer SystemsDisplays & ProjectorsGamingMotherboardsNetworkingPeripheralsStorageVideo Cards
GuidesGamingAsk the ExpertsNewsletterAboutForums
RTX 4090Windows 11Halo InfiniteBattlefield 2042Elon MuskGTA 6RTX 3080HDMI 2.1
CPU, APU & Chipsets
After hearing the ringing cries of the death of Intel's Larrabee circle around the internet we now may just be hearing hints that Larrabee is not completely dead (it feels much better). The rumor comes from a small (and very short) interview conducted by PC Games Hardware. In it they speak with an unnamed Intel rep explaining the death of the consumer version of Larrabee and if you look closely even saying they there might be a chance of a Larrabee in the future.

The key phrase that will get some going is "Our first Larrabee product will not be launched as a standalone discrete graphics product, but rather be used as a software development platform for internal and external use." As you can see it is directly saying that there will be more than one but that the first will be for development only. This is probably a great move on Intel's part as it will potentially allow some time for the ecosystem needed for a project like this to be created in the background (and with help).

Of course this does not say that there will be a Larrabee for the consumer but a later comment does again point us back in this direction. The statement, "we remain committed to delivering world-class many-core graphics products to our customers. Additional plans for discrete graphics products will be discussed some time in 2010." is our second indication that we may see a consumer based Larrabee product in the future.

So, while we all have to mourn the loss of Larrabee for now; we can look forward to Intel addressing this in the future. What that product will be only Intel knows but we can hope that it will indeed be something new and not just a refresh of their aging GMA product line. 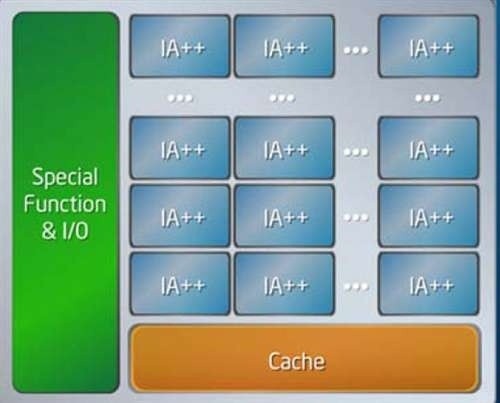