An E8700 had been listed on Intel's website quite a whiles back which stated it uses the Wolfdale core and runs at a stock clockspeed of 3.5GHz (using a 10.5x multi) and has a TDP rating of 65 watt. All other specifications match the rest of the Wolfdale family. 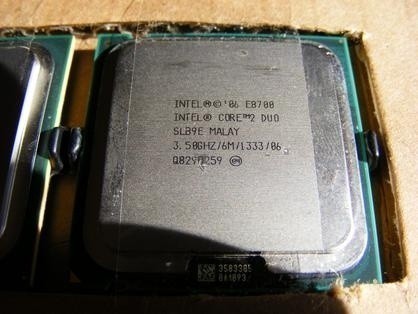 Since the listing we've heard nothing more as to its release date / availability. However, a user over at the XtremeSystems forums has just reported today that he received an E8700 directly from Intel's chip factory in Malaysia, despite actually arranging a QX9650 to be sent to him. You can see the CPU he received above which distinctly shows that is an E8700 processor and previous known specifications are now confirmed as per what's imprinted on the heatspreader.

We're still yet to hear of a definitive launch of this model.
NEWS SOURCE:pcgameshardware.com
Newsletter Subscription