All NewsBusiness, Financial & LegalCases, Cooling & PSUContests & GiveawaysCPU, APU & ChipsetsDealsDisplays & ProjectorsGamingMotherboardsScience, Space & RoboticsStorageVideo CardsVirtual & Augmented Reality
All ReviewsAll ArticlesAudio, Sound & SpeakersCases, Cooling & PSUCPUs, Chipsets & SoCsComputer SystemsDisplays & ProjectorsGamingMotherboardsNetworkingPeripheralsStorageVideo Cards
GuidesGamingAsk the ExpertsNewsletterAboutForums
Epic Thanksgiving Giveaway: MSI GeForce RTX 3080 GAMING X TRIO!
Connectivity & Communications
Support for USB 3.0 is rumored to be pushed quite about for most Intel chipset, but AMD fans are soon going to get a board that offers support for both USB 3.0 and SATA 6Gbps. The board is called the GA-790FXTA-UD5P. 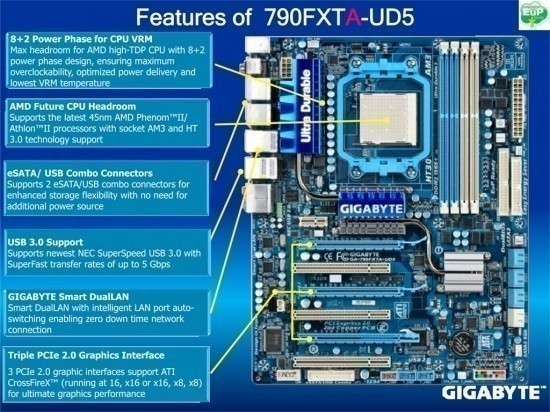 Gigabyte uses the AMD 790FX + SB750 chipset. The board features a redesigned expansion slot layout and support for dual channel DDR3 memory. The CPU gets its juice from an 8+2 phase VRM supporting 140W processors and a 2 phase VRM powering the four DDR3 slots.

DDR3 1866 will be supported with overclocking and DDR3-1333 and DDR3-1066 are naturally supported. The system uses a heatpipe to cover the CPU VRM, Northbridge, and Southbridge.
NEWS SOURCE:techpowerup.com