NewsReviewsArticlesGuidesGamingAsk the ExpertsNewsletterForums
Online Video
Last week a fellow called David Cummings, Director of Marketing for Desktop GPU from AMD, flew into Taipei and gave local press here in Taiwan a solid presentation on the new ATI Radeon 5970 dual GPU video that is being released today around the world. 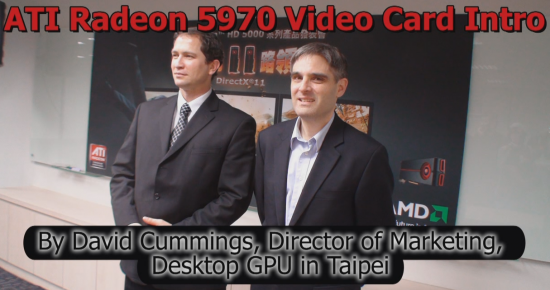 We headed on over to the AMD offices in Taipei and recorded the presentation for everyone to watch. It summarizes the new video card in AMD speak, but David does go into quite a bit of details, especially the "UNLOCKED" feature of the card that allows for some pretty insane overclocking.

At the end of the video we also get a bit of a hands-on look at ATI Eyefinity technology running DiRT 2, which is an upcoming DX11 rally car game.

For the actual performance numbers of the card, take a look at our review of the Sapphire Radeon HD 5970 video card right here.