NewsReviewsArticlesGuidesGamingAsk the ExpertsNewsletterForums
GIVEAWAY: Gaming peripherals upgrade thanks to Corsair worth $280
Online Video
Codemasters all excited by the demonstration of its upcoming car racing game DiRT 2 during the recently finished Windows 7 launch event in NYC, sent us over a tech video off the game for us all to see. 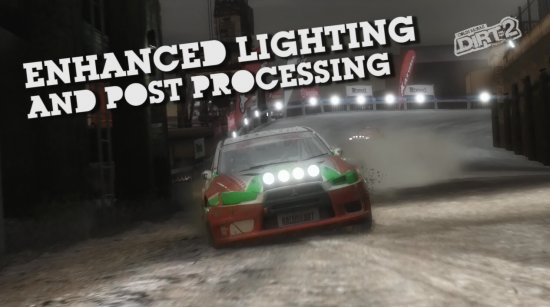 The video shows firstly the difference in image quality between DirectX 9 and DirectX 11 and goes on to show some of the extra graphics processing ability of DX11 and Windows 7.

Also announced is that you'll be able to buy this game all around the world by around December 4th, depending on where you are located. Of course, right now, you'll need a DX11 video card from AMD to enable the fancy DX11 features.

Check out the video here which we uploaded:

UNIVERSAL CITY, Calif. - Oct. 22, 2009 - Codemasters today revealed the DirectX 11-powered Games for Windows Live edition of DiRT 2 at Microsoft Corp.'s New York Windows 7 Launch Event. Codemasters also announced that the Games for Windows Live version of the highly-anticipated racer will be shipping on December 1st in North America and releasing on December 3rd through EPAC territories with a December 4th street date in the UK.

Following the critical and commercial success of the console editions of DiRT 2, Codemasters Studios has integrated the wealth of new performance-enhancing features available in DirectX 11 in the Games for Windows Live edition. DiRT 2 will deliver the definitive off-road experience and its launch will herald a new generation of games powered by the superior DirectX 11 technologies. Gamers can preview DiRT 2 as powered by DirectX 11 in gameplay and tech videos now showing at www.dirt2game.com.

"The opportunity to enter into a strategic relationship with Microsoft to fuse key DirectX 11 technologies with Codemasters' EGO Engine and set the new standard in race gaming on home computers was irresistible," said Bryan Marshall, chief technical officer, Codemasters. "By taking advantage of the DirectX 11 feature set included in Windows 7, including hardware tessellation, multi-threading and Shader Model 5.0, we will deliver the most immersive and realistic off-road racing experience yet and set the technical benchmark in the genre."

Codemasters will take advantage of DirectX 11 features to add to the realism of the racing environment. Hardware tessellation will further improve the appearance of water and other surfaces as well as crowd animations. The performance of Shader Model 5.0 will aid in creating an even richer 3D experience, enhancing key image quality parameters such as depth of field, ambient occlusion and shadows. These DirectX 11 features, and many others, combine to deliver the most exciting and visceral racing experience yet.

"By working together with Codemasters to deliver early access to DirectX11 technologies for the Games for Windows Live edition of DiRT 2, we are able to demonstrate the new levels of immersive gameplay and visual performance gamers can experience in Windows 7," said Mike Ybarra, general manager of Windows Product Management at Microsoft. "Through our strategic relationship and the delivery of the DirectX 11 feature set, we are confident Codemasters will lead the way in the development of the next generation of PC games."

DiRT 2 Games for Windows Live edition supporting DirectX 11 technology is set to ship on December 1st in North America and releasing on December 3rd through EPAC territories with a December 4th street date in the UK. Editions for the Xbox 360 video game and entertainment system from Microsoft, the PLAYSTATION3 computer entertainment system, Wii, Nintendo DS and PSP (PlayStationPortable) system are in stores now. For the latest videos and information, accelerate over to www.dirt2game.com.