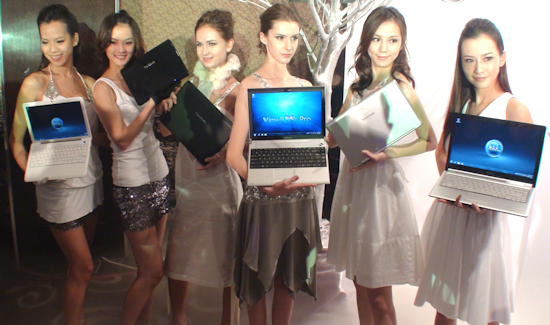 At the event, Viewsonic launched a slew of new notebooks, but notably missing were any new netbooks or nettops. There was talk of an NVIDIA ION based netbook being launched today, but that wasn't to be either.

We managed to go hands-on with the brand new ViewBook Pro notebook. It is Viewsonic's CULV notebook that comes with an Intel Core 2 SU7300 processor and 2GB of RAM, with the option to upgrade to 4GB of DDR3 memory. Viewsonic claims 8 hours battery life, but that can be extended to a maximum of 12 hours by adding in a secondary battery in the optical drive bay area.

There are two models - a black and silver one. The silver model (Pro S) is supposed to come with a 8x DVD burner for $1099 USD and the black model (Pro B) is supposed to be cheaper at $999 USD since it lacks the optical drive. The standard ViewBook will go on sale around the world next week, but the ViewBook Pro will begin selling next month.

We'll push Viewsonic to send us one for review soon!