All NewsBusiness, Financial & LegalCases, Cooling & PSUContests & GiveawaysCPU, APU & ChipsetsDealsDisplays & ProjectorsGamingMotherboardsScience, Space & RoboticsStorageVideo CardsVirtual & Augmented Reality
All ReviewsAll ArticlesAudio, Sound & SpeakersCases, Cooling & PSUCPUs, Chipsets & SoCsComputer SystemsDisplays & ProjectorsGamingMotherboardsNetworkingPeripheralsStorageVideo Cards
GuidesGamingAsk the ExpertsNewsletterAboutForums
Windows 11Halo InfiniteBattlefield 2042Elon MuskGTA 6RTX 3080HDMI 2.1Bitcoin Mining
Motherboards
We have more Intel rumors today. This one is surrounding the Turbo Memory successor Braidwood. Intel Turbo memory was a method of increasing I/O performance through the use of an NVRAM module. This feature showed up in a few notebooks but never really took off. On the whole the performance gain was not measureable so it was deemed as un-needed by many people that tested it.

Braidwood was supposed to bring this technology to the P55 in the form of the P57 chipset.

All of that is out the window if the rumors being reported are true. You see they claim that Intel is shelving the whole Braidwood project until a later date. This means that since the P57 is not much more than a P55 with Braidwood there is no reason to release the P57.

Of course again the problem with Turbo Boost (Much like Ready Boost) did not have any real measurable effect on performance. Did they help? Yes, they did but not in a way that was visible to the consumer. This coupled with rumored problems with the software side of Braidwood could be the main reason for shelving it for now. It is possible that like HyperThreading Turbo Memory will reappear when the technology is viable and the platform it is run on can really benefit from the technology. 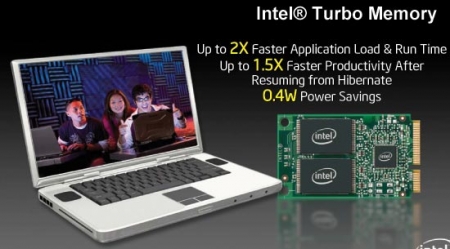