All NewsBusiness, Financial & LegalCases, Cooling & PSUContests & GiveawaysCPU, APU & ChipsetsDealsDisplays & ProjectorsGamingMotherboardsScience, Space & RoboticsStorageVideo CardsVirtual & Augmented Reality
All ReviewsAll ArticlesAudio, Sound & SpeakersCases, Cooling & PSUCPUs, Chipsets & SoCsComputer SystemsDisplays & ProjectorsGamingMotherboardsNetworkingPeripheralsStorageVideo Cards
GuidesGamingAsk the ExpertsNewsletterAboutForums
Halo InfiniteBattlefield 6Elon MuskGTA 6RTX 3080RTX 3070HDMI 2.1Bitcoin Mining
Business, Financial & Legal
Wow this will be of interest to anyone that has an iPhone in the US. Apple and AT&T might have a price to pay for their heavy advertising of features that they will not support.

In the state of Louisiana there is a class action law suit that is being filed against Apple and AT&T for the continued lack of MMS (multimedia messaging system) despite ads by both companies showing this as a major feature.

The suit claims that AT&T has not upgraded its towers to support MMS properly on their network but continue to advertise this service for other phones and even have a package plan for it.

So I am not sure what they are trying to say here, there is a simple fact that AT&T does have MMS support for other phones but not the iPhone. Apple did state that was a major feature of the new iPhone OS 3.0 and the 3G S. But for some reason there is still no support for this option from AT&T.

This law suit could get interesting if more states pick up the torch and march on Cupertino. 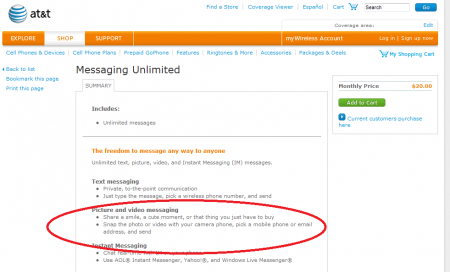