All NewsBusiness, Financial & LegalCases, Cooling & PSUContests & GiveawaysCPU, APU & ChipsetsDealsDisplays & ProjectorsGamingMotherboardsScience, Space & RoboticsStorageVideo CardsVirtual & Augmented Reality
All ReviewsAll ArticlesAudio, Sound & SpeakersCases, Cooling & PSUCPUs, Chipsets & SoCsComputer SystemsDisplays & ProjectorsGamingMotherboardsNetworkingPeripheralsRAMStorageVideo Cards
GuidesGamingAsk the ExpertsNewsletterAboutForums
RTX 3090 TiRTX 4090Diablo 2GTA 6Halo InfiniteElon MuskRTX 3080HDMI 2.1
There's nothing quite like a good dose of rumour and spec to kick start a week, and this week is no exception, with a little birdie telling us that PC partner - owner of both Sapphire and Zotac - may be mulling a retooling operation to accommodate Intel's Larrabee.

Protecting its upcoming product with the secrecy most countries reserve for their nuclear weaponry, Intel is maintaining almost absolute silence on Larrabee.

Even analysts are apparently being kept in the dark, with most tentatively putting their bets on Intel initially aiming its long anticipated offerings at high-end graphics for workstations and HPC, only then to filter down to PCs - starting with gaming machines.

Of the five possible segments for Larrabee to hit - WS, Enthusiast, Performance, Mainstream, and Value/entry - graphics guru, Jon Peddie, reckons "Intel will shoot for the Performance segment," taking a cue from ATI's model of targeting the segment with the highest volume of sales. This would largely make sense, although the firm might also do well to target the WS segment with its high margins and options to out-invest partners in ISV relations. Indeed, this could even make or break success at the end of the day.

WS, however, is very much NVIDIA's bread-basket for margins - one which AMD has tried and failed repeatedly to crack. If Intel manages to convert Zotac, a dyed in the wool NVIDIA partner, it would be a massive blow to the Green machine, sending yet another partner to the wall. 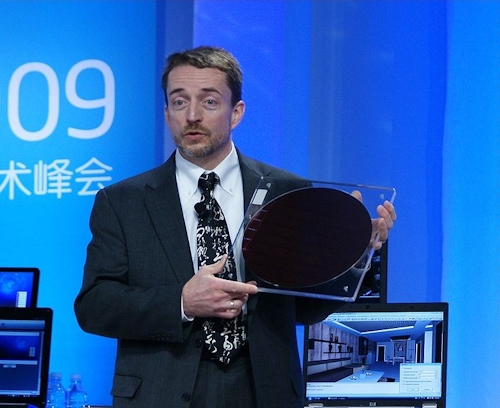 Industry insiders tell us they are "pretty positive" PCP will be retooling for Larrabee, but whether or not this goes to Sapphire or Zotac, is another matter entirely.

"Sometimes Intel has difficulty swaying the top tier with new technologies," Jim McGregor of In-Stat told us. But pontificating Peddie noted that "if history is any basis for opinion...when Intel bought out its last discrete graphics controller - the i740 in 2000- it signed up about 100 AIB builders, more than any other company."

" Their brand is so strong the AIB builders will be climbing all over each other to get it," he added.

McGregor also insisted Intel was "adamant" it had to beat anything else available or not release Larrabee at all, but posited that whether or not this might include parallel processing for GPGPU functions remains to be seen.

What isn't likely, according to McGregor, is for Intel to pay for any of the aforementioned retooling, with the firm likely to prefer the perfunctory doling out reference designs and engineering support. "If it goes beyond that then they would be better off just selling the cards themselves," McGregor told us.

When we asked Intel about the rumours we were unsurprisingly given a "we're not going to comment", but we're not really sure we even needed one.

With persistent whisperings from industry sources that some initial meetings are indeed taking place, it may be only a matter of time before the deals start going through and the news leaks.

After all, PC Partner supplies huge tier ones like Acer and HP, so the business will already be there.

On the other hand, there's little to no chance that Sapphire would ever make Intel GPUs, being as its generally a firm known for its ATI loyalism.

Still, if we were Intel right now, we'd have to say the most logical step would be to facilitate retooling PCP and give NVIDIA a good run for its money - particularly if the firm can bundle its CPUs which are already dominant in the WS, Enthusiast and Performance segments.