AMD has maintained that netbooks will eventually fade and be assimilated by the notebook market. There are some indications of this happening as netbook makers play a game of technological leapfrog with netbooks each one offering a more powerful (and of course more expensive) version.

I have to wonder if the netbook will eventually fall to the level of the MID. And the Thin-And_Light will be the next big rush. 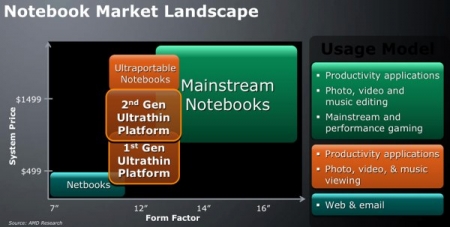 AMD thinks netbooks are a bit of a fad, and is laying down a roadmap for thin-and-lights while keeping its distance from any sort of "Atom killer." The existing Yukon platform -- featured in HP's dv2 -- just got an upgrade in the form of a dual-core AMD Neo chip, but things will really start to get exciting later this year with the introduction of Congo, which will pair a dual-core Neo with much better graphics and a more modern chipset. Perks in Congo, which is based on the M780G chipset and sports ATI Radeon HD 3200 IGP graphics, include hardware decoding for HD formats, DirectX 10 gaming