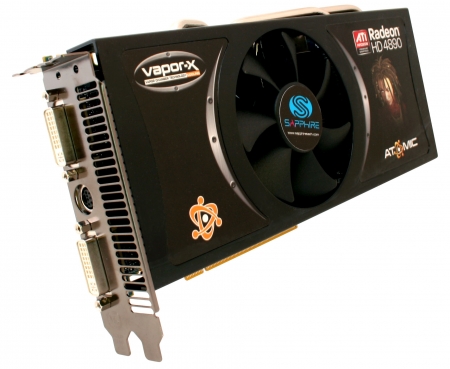 The new ATOMIC card comes clocked from the factory with a 1GHz core and 1GB of GDDR5 clocked at 1050MHz. SAPPHIRE says that the HD 4890 ATOMIC Edition will be a limited edition product and is holding a launch promotion giving users a chance to win one.

Other than maximum performance straight out of the box, SAPPHIRE is bundling the card in a distinctive silver box and an enhanced accessory bundle which even includes an HDMI cable. In order to keep the temps down, they have used the Vapor-X cooler which allows for lower speed, quieter fans.

May 13, 2009 - SAPPHIRE technology has just announced its ATOMIC Edition of the HD 4890 - delivering the fastest single GPU graphics card available based on ATI/AMD technology. Building on its success with Special Editions based on its Vapor-X Vapor Chamber Cooling technology introduced over a year ago, the SAPPHIRE HD 4890 ATOMIC Edition will be a limited edition product aimed at the enthusiast looking for the maximum performance straight out of the box.