TechPowerUp found out that NVIDIA somewhat silently made the nForce 980a reference board official by adding the board to their product page. The 980a doesn't seem to be anything groundbreaking from NVIDIA, but it does bring AM3 and DDR3 support 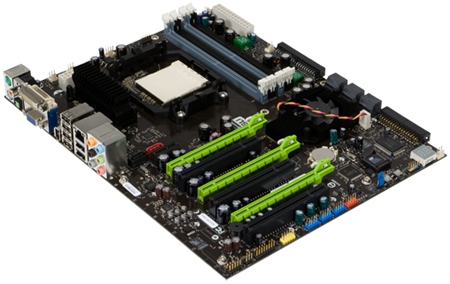 What it does bring is yet another choice for AMD processors. Intel has the Core i7 locked down. If you want a Core i7 chip in your PC, you have but one choice, and thats an X58 motherboard.

The nForce 980a SLI motherboard has everything you've come to expect from NVIDIA. Dual gigabit LAN, 3-Way SLI support, lots of USB, and onboard video via the built in GeForce 8300 IGP. 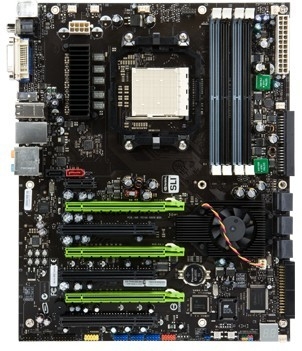 The board pictured is just that of the refernce design. Once NVIDIA's partners get their hands on it, you can bet that their own cooling solutions will make it into the mix.

NVIDIA nForce 980a SLI media and communications processors (MCPs) power the most feature rich, high performance motherboards for AMD AM3 CPUs. As a premier enthusiast platform, nForce 980a features SLI technology for maximum graphics performance and are specifically designed to harness the power of GeForce GPUs for gaming and beyond.