When I first read Semi-Rugged I laughed, then I read what they went through to get that and I was pretty impressed. The ThinkPads were run through the torture tests even though the model is not advertised as a ruggedized notebook.

Military Spec Tested Against the Elements

Baked, battered, blistered and blown with sand, Lenovo put the lineup of eight ThinkPad laptops through the gauntlet to pass a significant number of specifications for military-grade computing.

The ThinkPad laptops met tests for:

Dust - Blows dust for an extended amount of time 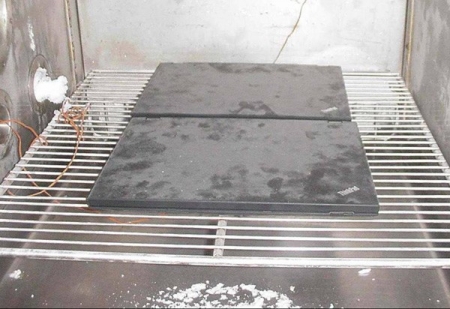 Lenovo today announced that it is designating eight ThinkPad laptops for use in field and vehicle semi-ruggedized computing environments such as in public safety, utilities, construction and the military. The ThinkPad X200, X301, X200s, X200 Tablet, T400, T500, R400 and SL300 laptops meet a barrage of military specifications tests and are enhanced with specially-designed durability features such as an air-bag like protection system and a roll cage in select models. Because field computing requires excellent screen viewability, Lenovo is also adding a new optional 680-nit high brightness panel to its most popular laptop, the ThinkPad T400 laptop.

"ThinkPad is well known for quality, reliability and innovative security technologies for business computing," said Tom Ribble, executive director, Worldwide ThinkPad Product Marketing, Lenovo. "The truth is we've always built tough laptops that can weather extreme conditions from hiking the rainforests of the Amazon to flying in space. You don't need a PC that looks like a tank to excel in harsh environments, and unlike many of our competitors, we don't put an extra charge on toughness."