The 1TB Nitro SSD is the most compact SSD per gigabyte: 15.40GB per cubic centimeter in a 2.5-inch form-factor -- at least three times greater than any other SSD on the market. This high density in a small form factor has been achieved through innovative engineering techniques coupled with advanced industrial design that yields an exceptionally thin enclosure. 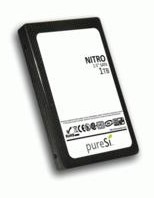 pureSilicon claims the sustained read and write speeds to be around 240MB/sec and 215MB/sec respectively. But while it may bring the best of both worlds in terms of speed and capacity, I'm sure the majority of you have already ruled out pricing being on your side, making this more of a teaser than anything else.

The company is yet to disclose their selling figure for this beast but it's not expected to be anywhere near within reach for most of us. We're still waiting for the cost of standard low capacity MLC based SSDs to drop down to earth some more yet.

Further details can be had within the official PR here folks.
Newsletter Subscription