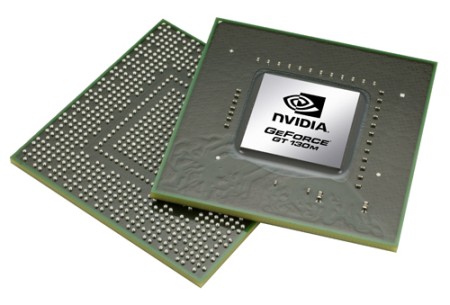 Dubbed the GeForce 100M series, this includes the G105M, G110M and GT 130M GPUs which are said to offer significant performance improvements over their predecessors. The G105M is over 55% quicker than the 9300M GS it replaces and features 8 shader cores, whilst the G110M takes over the reigns from the 9500M GS and features 16 shader cores; said to be around 35% faster.

The top-end GT 130M is the successor to the 9600M GT / 9650M GT graphics adapter and features 32 shader cores. This GPU also carries PureVideo HD support. NVIDIA claim a performance boost of around 17% over the 96xxM series.

The new series of GPUs should be making their way into notebooks by late feb/early March.