All NewsBusiness, Financial & LegalCases, Cooling & PSUContests & GiveawaysCPU, APU & ChipsetsDealsDisplays & ProjectorsGamingMotherboardsScience, Space & RoboticsStorageVideo CardsVirtual & Augmented Reality
All ReviewsAll ArticlesAudio, Sound & SpeakersCases, Cooling & PSUCPUs, Chipsets & SoCsComputer SystemsDisplays & ProjectorsGamingMotherboardsNetworkingPeripheralsStorageVideo Cards
GuidesGamingAsk the ExpertsNewsletterAboutForums
RTX 4090Windows 11Halo InfiniteBattlefield 2042Elon MuskGTA 6RTX 3080HDMI 2.1
Video Cards
We recently saw a swarm of pre-release tidbits hit the web about NVIDIA's upcoming dual-GPU monster, the GTX 295. However, there were a fair number of restrictions in place as to just what was allowed to be revealed about the card's characteristics and performance at the time.

XFastest does away with all that and goes the full hog, getting hold of not one, but two GTX 295s, pairing them up on a Core i7 965 EE based system and slamming out some Quad SLI results using 3DMark Vantage. 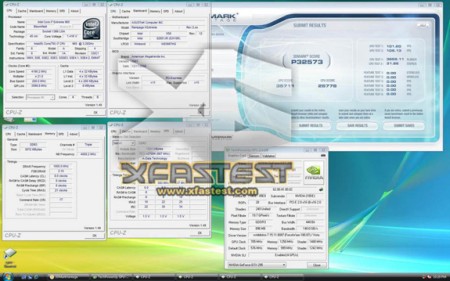 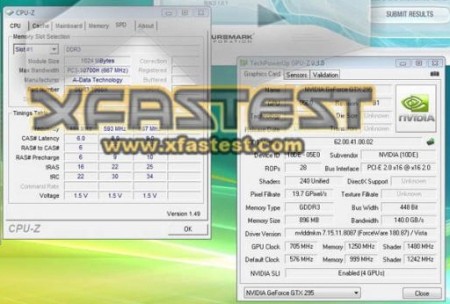 Sure, it doesn't beat any records (the top score is still held by a triple GTX 280 setup scoring 36598), but it's still a very impressive result and there's no doubt the drivers need a lot more optimizing yet.
Newsletter Subscription