This 16" (16:9) entertainment notebook comes with quite a list of features. The Bravo EX620 was announced back in October and now will finally be available for you to grab.

MSI launched this with a Rock N Roll style launch even featuring dancing models and a raffle style giveaway.

Read about the launch event here.

Check out the specs here. 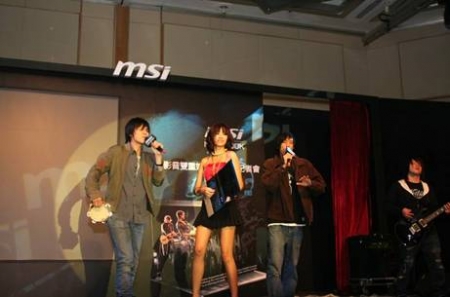 (Taipei) Led by MSI Chairman Joseph Hsu, MSI Notebook is continuing to power ahead with the launch of its flagship multimedia entertainment notebook, the MSI Bravo EX620. At the global launch, the Cinema Pro technology aboard the Bravo EX620 delivered a cinema-grade sensory experience and stunned the audience with its superb performance! The grand launch of the MSI Bravo EX620 was not only attended by some of the top names in the industry but also a horde of interested media. All agreed that MSI Notebook's strong overall performance should see the company achieve record sales again in 2009.

The surprise prize draw at the launch became a highlight of the Bravo show. Microsoft Taiwan General Manager Davis Tsai drew the ticket of reporter Cai Jia-long from cnYes.com, making her the first lucky owner of the MSI EX400 notebook.