COMPUTEX Taipei 2010 - Indilinx, a leader in consumer performance solid state controllers has a product that we have all been waiting to see. Code Named Jet Stream, this SATA 6G controller was once thought to be hitting e-tail shelves in early 2010 but has been pushed back to 2011, possibly late 2011. 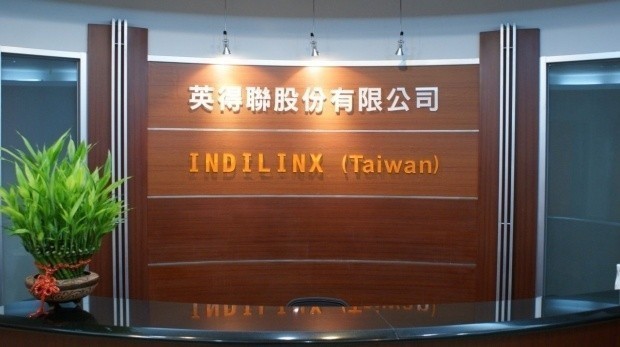 Replacing the 16 channel Jet Stream in 2010 will be Barefoot 2, a product we know little about. Barefoot 2 will be an 8 channel controller with a maximum capacity of 512GB and wellthat is really all I have at this time other than 2010 is the ETA and the words very soon came to the surface a few times.

COMPUTEX Taipei 2010 - Last week we visited ASRock who gave us an exclusive look at some of its new technologies including the Vision 3D HTPC and AIWI, but one thing we didn't have time to check out when we went to their office was an interesting new feature that will be bundled for free in ASRock's new P55 Extreme3 motherboard package.

ASRock has developed a simple yet smart little device that allows users to easily add two USB 3.0 ports to the front of their case. The device is really just a small bracket that fits into a spare FDD-sized opening at the front of your case and then a cable from the bracket runs to one of the USB 3.0 pin connectors on supported ASRock motherboards.

Something simple, but it's a great idea especially if you don't like fiddling around at the back of your system and besides, who doesn't like free? Chris Lee from ASRock told us in the video above that its P55 Extreme3 mobo will go on sale in next week or two.

COMPUTEX Taipei 2010 - Crucial today introduced a new addition to their Ballistix line of products. In this revision Ballistix gets a new look from a new heat spreader, gains a temperature sensor and a downloadable utility to log data from the drive just as a Formula One car would monitor and report data from its sensors. 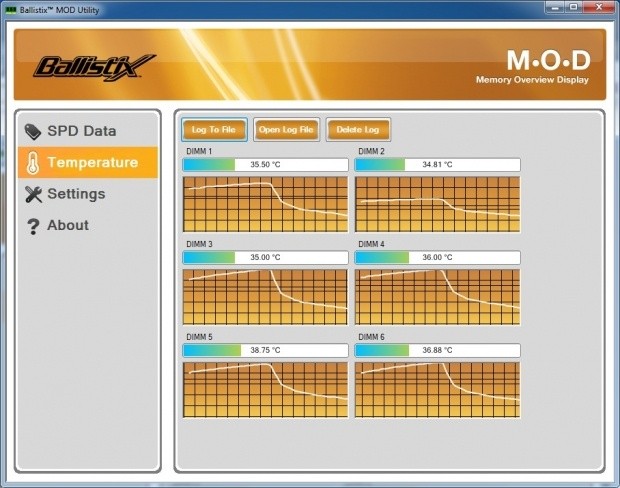 I was talking with a few members from Crucial today and asked about different skins for the new Ballistix utility and received a wealth of information about what is to come in the future.

COMPUTEX Taipei 2010 - During an ASUS press event earlier today we ran into a brand new and unseen concept motherboard from the Taiwanese company called the Immensity.

It is an Intel X58 Express based ROG board for the latest Socket 1366 processors and what's real interesting about is that it comes with not only a Lucid Hydra processing chip onboard, but also a discrete GPU. And we aren't talking any standard Intel IGP, but a mid-range GPU from either NVIDIA or AMD, I don't think the actual choice has been made at this stage of the game, remembering what we saw was a very early concept mockup. I also doubt it is even working right now.

Kris from ASUS claimed that by adding in the onboard discrete GPU, users should see up to about a 20% increase in performance by combining it with your traditional discrete GPU in form of a usual PCI Express video card. Also since Lucid's much talked about Hydra chip is installed, you'll be able to mix and match any video card from ATI and NVIDIA and run them in Hydra dual or triple graphics mode.

COMPUTEX Taipei 2010 - Now this is pretty cool people. We just saw that AMD spoke about its Fusion APU chips at its Computex 2010 press conference, during it at the end Rick surprised us a little by giving attending press the world's first public demo of Fusion APU actually up and running. 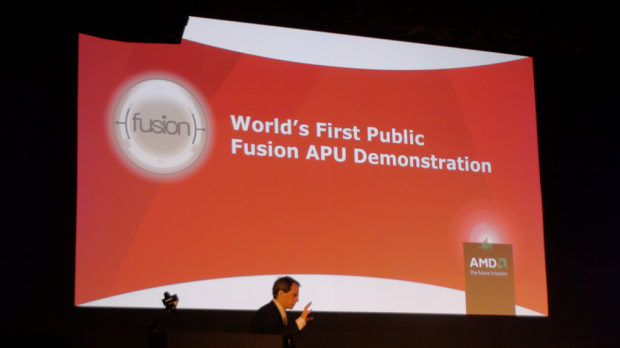 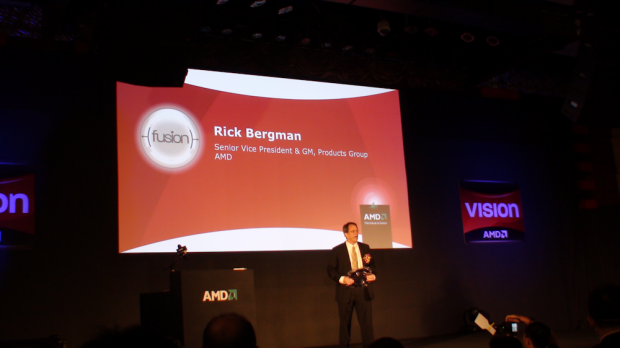 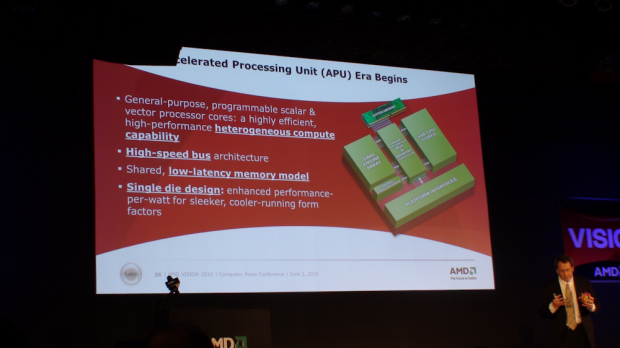 I am glad to see USB 3.0 ports finally coming to market in more and more notebooks, desktops, and mainboards. The increase in the number of USB ports making it to the market means that we are seeing more and more USB 3.0 gadgets land as well. 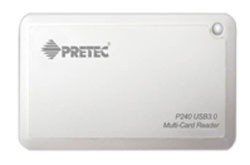 Pretec has announced what it claims to be the world's first USB 3.0 memory card reader called the P240. The official name for the device is the P240 USB 3.0 High-Speed Multi-Card Reader. The card reader supports SDHC, SDXC, CF and other memory card formats.

COMPUTEX Taipei 2010 - Walking around the show floor today we spotted a company that we hadn't heard of until now called ADOMAX Technology and this Taiwanese company specializes in producing unique mice and keyboards as well as HD web cameras.

During our stop at their booth we got an introduction firstly to their touch keyboard prototype. It's a product unlike many others that doesn't use keys like on a normal keyboard, but instead relies on touch. It also comes with a touch sensitive mouse area meaning it would be rather suitable say in the lounge room for instance where you only want one device to handle input on your TV. ADOMAX mentioned that its target audience will be for consumers with PS3 gaming consoles and those who watch TV on their computers. Unfortunately the sample we saw today was only a mockup as the product is still in the development stage, but we will be interested to try it out when it goes on sale later this year.

Similarly we were also introduced to another touch input product, this time the ADOMAX touch mouse. This sort of technology is similar to the Apple Magic Mouse for Mac computers, but this difference with this one is that it not only works on Macs, but also Windows 7 and Vista machines.

Get an early look at both products above in the video.

COMPUTEX Taipei 2010 - A-DATA today gave us a taste of their next generation solid state drive that may one day reign as their flagship product. We can't really start quoting numbers right now since A-DATA has the Marvell SATA 6G controlled drive in RAID 0 at their booth but look for that to change in a couple of days. 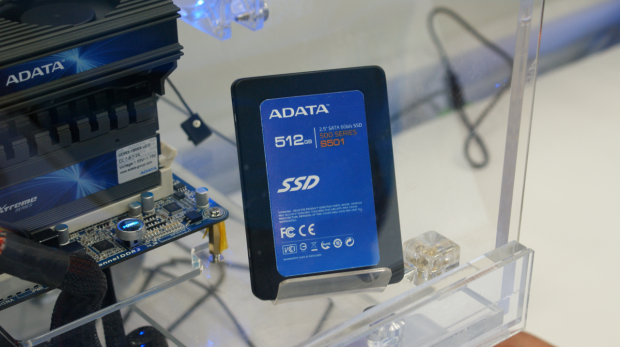 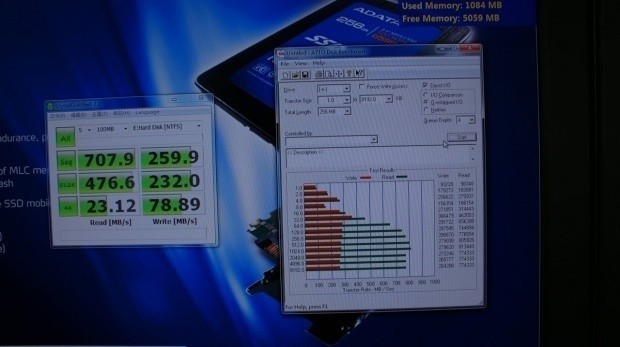 Dolby tells us about its audio enhancement tech for mobiles

COMPUTEX Taipei 2010 - One of our stops today was at the Dolby suite at the Grand Hyatt where we caught up with Keith who spent a little of his time telling us about one of its latest audio technologies called Dolby Mobile.

The technology has actually be on the market for almost one year now, but it's only recently that the consumer has a fairly wide range of choice for picking out a cell phone that has been tested and certified by Dolby to provide a solid listening experience.

Not only that though, but Dolby Mobile is also able to create a virtual surround sound experience from any set of headphones that are plugged into a phone with this tech and also improve the audio experience with a set of enhancements that improve things like bass and depth in the perceivable audio waves.

If you haven't heard about this technology until now, it's well worth watching the video above and getting a bit of an education on Dolby Mobile.