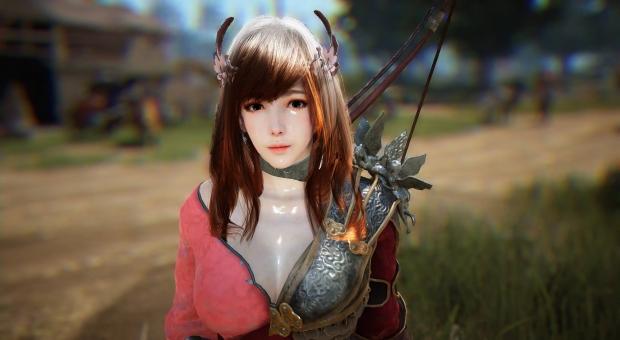 Black Desert Online has captured the hearts of a lot of MMO players. BDO is a game that breaks the typical mold and adds in quite a few features that aren't typical of the genre that help increase immersion and make the dynamic sandbox experience a fun one. At least 2.8 million people seem to agree on that at the moment, with more logging on each day.

Pearl Abyss could have used any off-the-shelf game engine to make the gorgeous scenery of the Republic of Calpheon and the Kingdom of Valencia, but they went the better route, custom-minting their own that focuses precisely on the areas they wanted. Beautiful landscapes, massive set-pieces, and incredibly detailed characters. No seriously, it's almost unreal the amount of detail and even the number of options for customization there are. 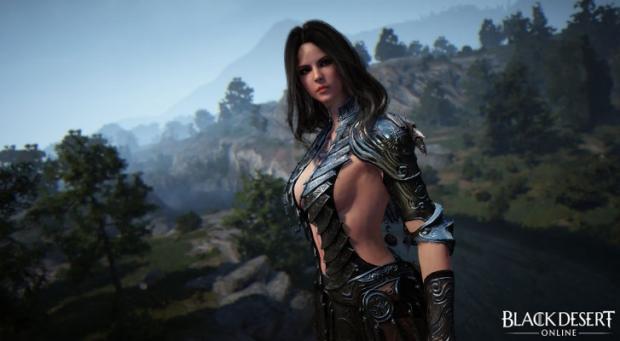 To test a game that has no internal benchmark, we took a small settlement that had a good number of buildings and players, and simply walked through it. There are always limitations to picking a method such as this because it means that the results might not be replicated due to the outcome not being controlled. But this should provide a general outline of what to expect.

First we'll take a look at 1080p, which should prove to be the easiest to drive and one that both manufacturers can do quite well. Though multi-GPU isn't tested here, only SLI is supported, CrossFire is curiously absent from support. 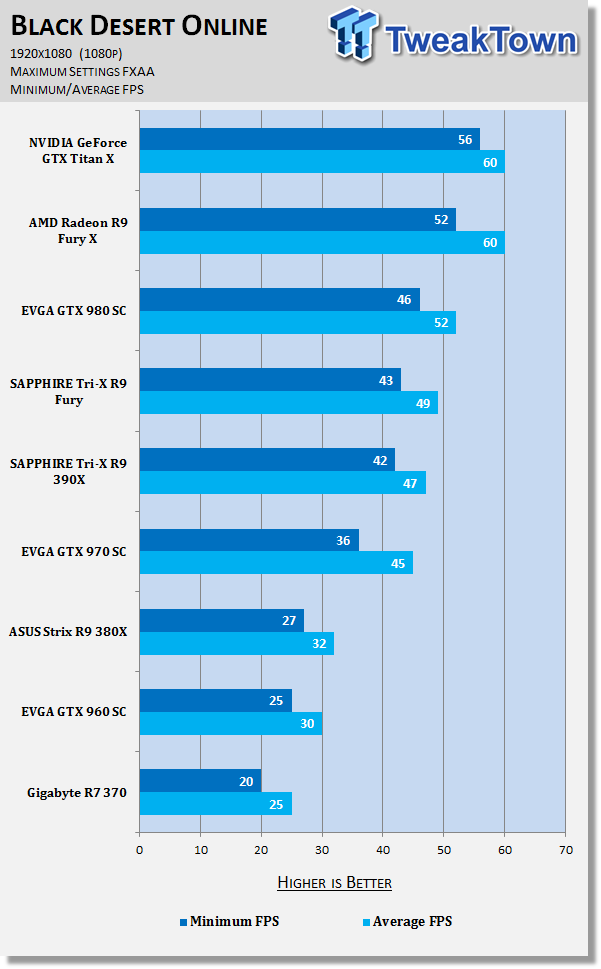 We seem to be locked at 60FPS no matter if v-sync is turned off or not. Despite that, we're seeing a relatively stable framerate across the board. The results aren't unexpected though we would have thought that the lower-end, at 1080p, could have provided a better average framerate. Here we're seeing some poor performance. But, with everything turned on, it looks good and that means it's a hungry game. It wants VRAM and cores to process those gorgeous effects. 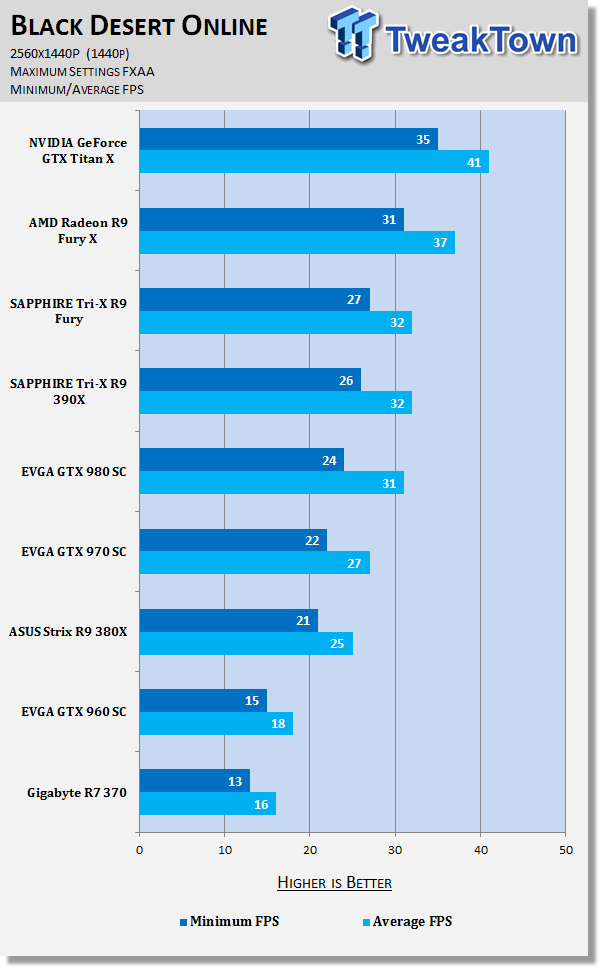 We stuck with the same presets at 1440p just to see if they'd at all be playable. And it turns out that it actually is for the higher-end cards.

The Titan-X keeps the lead, and the margin seems to widen as well. The GTX 960 an R7 370 become all but unplayable at this resolution and would necessitate turning down some effects and turning off FXAA completely. 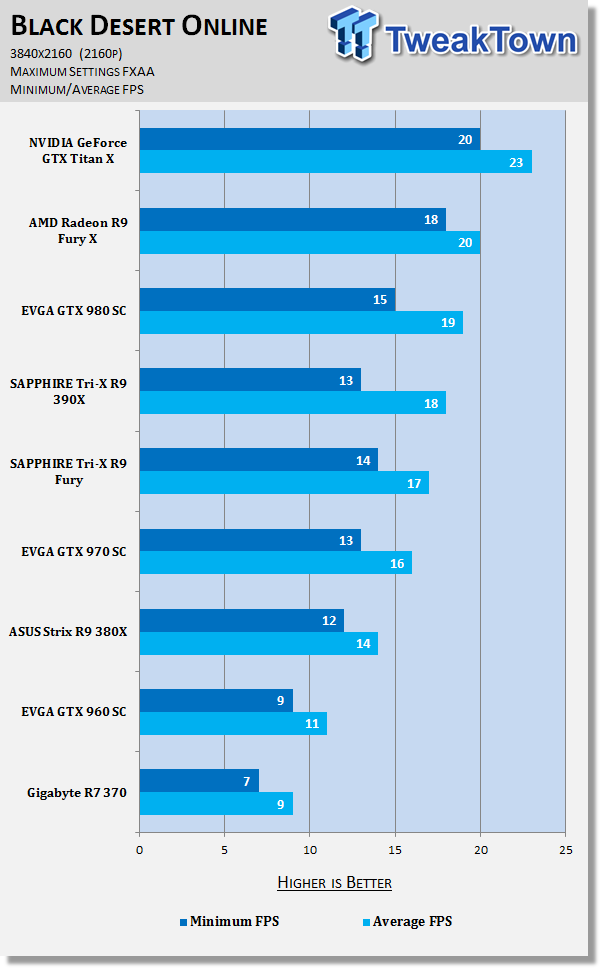 A modern made game tends to stretch even the fastest cards to their limit, and Black Desert Online is no exception. At 4K, we see a significant decrease in performance. But the average difference of 5FPS with the Titan X makes it a strangely smooth experience though it's far too slow to actually be terribly enjoyable.

Because of the limited VRAM on the GTX 960 and R7 370, those aren't recommended at all. The 970 even seems to come to its knees with the 3.5GB of effective VRAM. But it's more than that which causes the slower performance. It's visually stunning, and there's just not enough rendering power to make this game happen at its highest.

But should you be brave enough to bring things down a notch, maybe even turn off the redundant (not always needed at 4K) FXAA, then performance increases by a small margin. SLI and CrossFire can only make it faster, should profiles be created.

It's definitely a good looking game, a great looking game even, with a lot of attention paid to making characters look absolutely stunning. But all of that tends to take a toll, as does the dynamic environment. It requires a lot of graphical horsepower to run it at the max settings though there's a tremendous payoff.

It seems that the Titan X or, similarly, a GTX 980 Ti would be recommended to run this until further optimizations are made. It's not that the Fury X is slow, per se, but that NVIDIA's video cards are running a bit better here. The 8GB of VRAM does help on the R9 390X, however.

Be sure to let us know how your system runs.