This journey starts with my passion for high refresh rates, high resolutions and the bleeding edge. I started out when I first began working my first job with a Sony Trinitron G520 21" CRT. 1600x1200 at 100Hz+ was how the gaming addiction hit me hard. From there, it ended with me probably owning 20 monitors between that CRT and my current setup.

I first owned a 30" HP LP3065, but wasn't content with its stock 60Hz refresh rate. I stumbled across the 120Hz screens when Samsung released their very first NVIDIA 3D Vision-capable monitor, the Samsung 2233RZ. 3D Vision wasn't great for me and I turned it over to 120Hz. Stop. The. Presses - Amazing. Fluid. CRT-like. I was home. 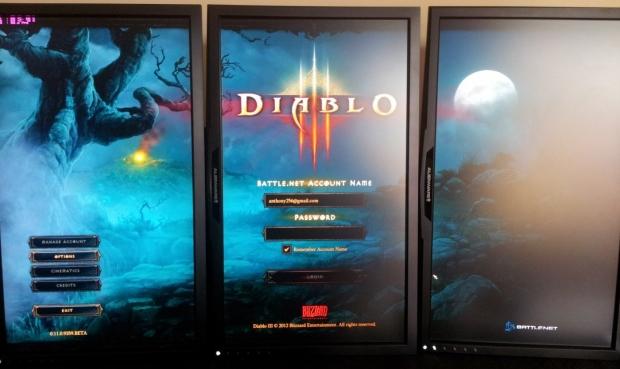 From there, I built my PC around hitting 120fps minimum and it was down right awesome. But, that was just 1680x1050 and coming down from 2560x1600 was just not fun at all. I then saw that Alienware were preparing the release of their AW2310 23-inch 1080p monitors and thought "here we go!" I snapped one quickly to test it with my then AMD Radeon HD 5970 video card and it was all good.

I did a fair amount of leg work to see if I could get triple-monitor 120Hz going, but I'd require two dual-link DVI outputs, as well as my mini DisplayPort converter to dual-link DVI. This required a top-end converter, which I acquired from Apple for $150 AUD. Someone over on the widescreengamingforums made a hacked .inf driver and away I went - one of, if not the first person in the world with three screens on an AMD GPU at 120Hz.

This gave me a resolution of 5760x1080 @ 120Hz, which at the time, was limited to NVIDIA's Surround Vision. At the time, I was not impressed with NVIDIA's offerings, which were the first Fermi cards, so I stuck with AMD until Fermi 2.0 came out. I had my fair share of problems, but for the most of it, it worked and worked well. I enjoyed countless hours of 5760x1080 goodness in Team Fortress 2, Battlefield: Bad Company 2, Dead Space 2 and countless other games.

I upgraded to some GIGABYTE GeForce GTX 570's and this is when things got interesting. I now had more power than ever to drive the higher resolutions, but my landscape felt too wide. The side screens weren't really utilized as my eyes didn't look at them. The fishbowl effect, whilst it looked good, just didn't justify the drop in performance. 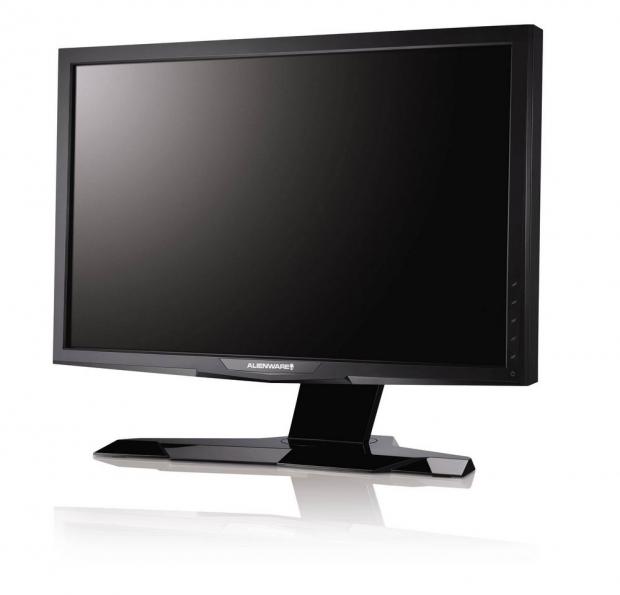 I started seeing more portrait-based setups with multi-monitors and thought that would be interesting to see with 120Hz. My Alienware AW2310's weren't capable of swiveling into portrait, so I was stuck. One day I had some spare time and ripped my three Alienware screens from their stands, put the stands on the ground and just put my monitors against some boxes, styrofoam packaging and got them as close as I could in portrait.

It worked. It looked amazing. I was floored. No longer did I get the fishbowl effect, or any stretching in my games. At a field-of-view of 90 in most first-person shooters, it looked like a very large single screen. I was happy with my results, until my friends saw it and noticed the bezels. For months, all I heard was "the bezels, Anthony, the bezels". I didn't care, I loved my 3-screen setup so much I looked past them, literally. My new resolution was 3240x1920 and it was truly epic. It felt like playing on a single big screen and virtually no adjustments were required to games to make them feel, look and be, awesome.

Fast forward to last week and I thought "why not?". I shot Cam an e-mail and asked if it was OK to do an un-bezeling work log/how-to and he loved the idea. I asked you guys and a fair amount of people were interested. So the near-$2000 worth of screens were going to be busted apart.

I gathered my screens downstairs in my living room, got out some tools, grabbed myself an alcoholic beverage and started thinking of how I was going to tackle this. I thought I'd rip one screen apart, see how to do it, take some initial pictures, then take my time with the second one and take detailed pictures and whatever I missed with the first two, I could get with the third. This method worked a treat.

Disclaimer, tools used and the beginning

One thing I would mention if anyone is going to do this, is that everything I'm about to tell you is solely for the Alienware AW2310 and does not apply to any other screen. And if you do this, your warranty is going to be well and truly void.

The tools I used:

One would think it was going to be hard, the Alienware AW2310 has a tonne of plastic housing around it and I thought it would have had taken hours.

Let's start, shall we? First up, on the back of the screen are four screws that need to be unscrewed. These screws hold the back plastic construction to the back of the monitor itself. Not unscrewing these will stop you from continuing. This is step one. 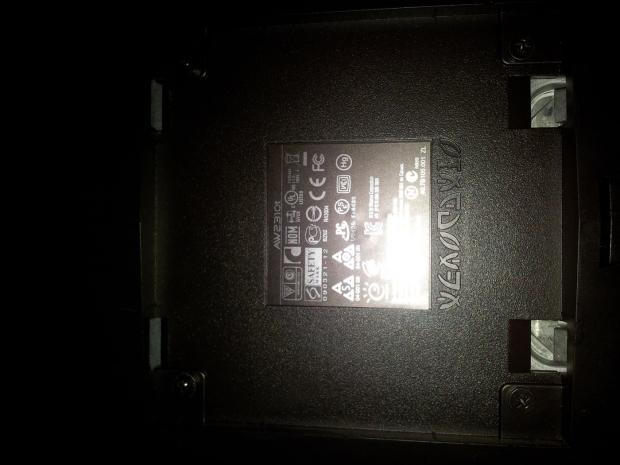 The screw in question, this time, up close. 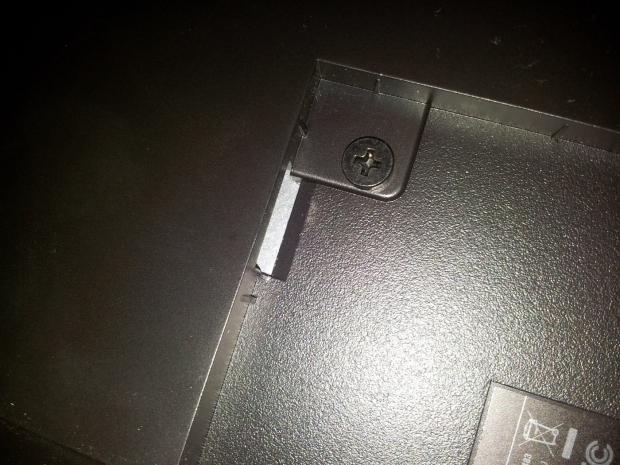 Below, is a shot of a single screen, before the de-bezel. As you can see at the bottom of the screen is the Alienware logo. This is the biggest chunk of plastic on the screen, so with three screens, this much plastic just has to go. 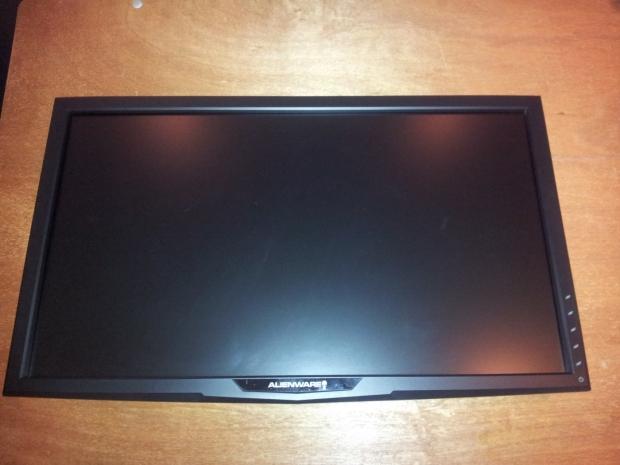 Next up is a tease of the three screens next to each other. The middle one was my first shot at de-bezeling. 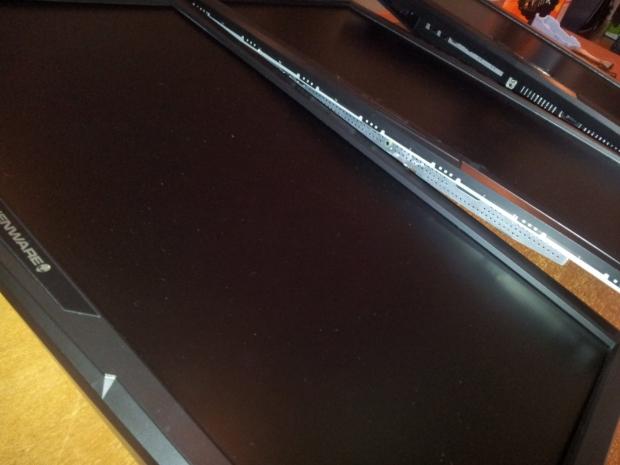 Here we have the three screens as shown from above and my brother's stylish cargo pants in the background. 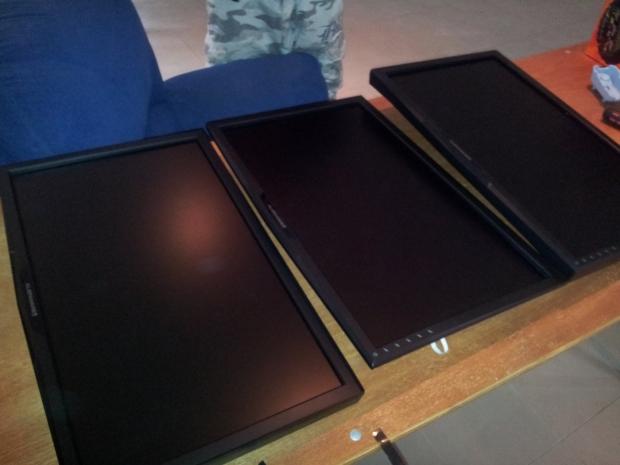 The next shot is where I recommend starting. From here, you can slide in a thin tool, maybe something similar to what I used (a scraper), or a flat-head screwdriver. I personally and highly recommend the scraper as you can shimmy it across as you snap more of the bezel away. 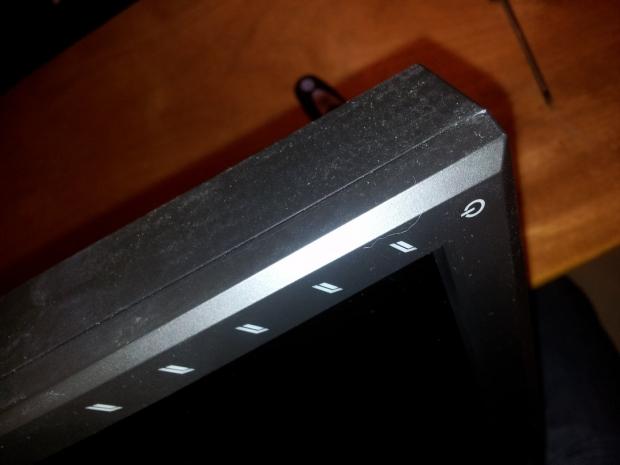 As you can see below, the scraper slots in perfectly and from here, you can begin ripping the plastic apart. Don't be scared of how it feels, it will sound really bad at first once you start doing it, but it has to be done. I found I slid it in and moved the tool back and forth to give it room and began sliding it more and more down. 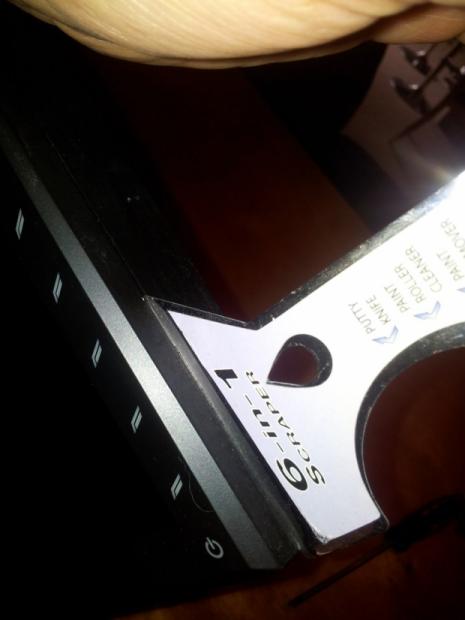 Unclipping the bezel and getting to the nitty-gritty

You can see here that you get a fair amount of a gap. To the very right of this shot you can see the plastic clips that keep it together. Move the scraper (or your tool of choice) along the plastic slit and slowly push them apart. Once you've done it once or twice, you'll become a master at it. 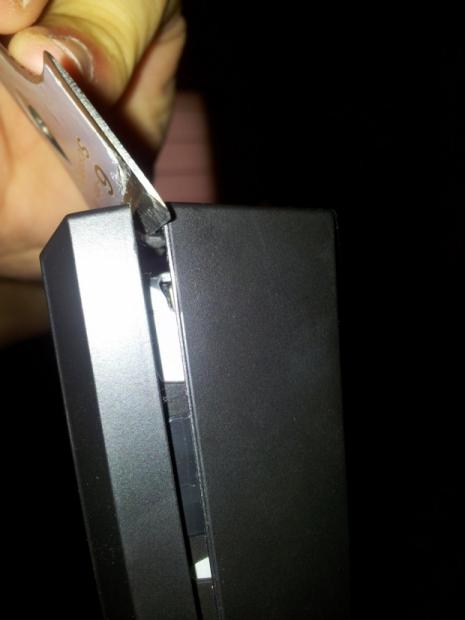 Below I've provided a shot of the actual clip. This is one of them that is out and sliding your tool beneath this (and to either side of the clip) allows it to be unclipped and released. Follow this all the way around the screen until the entire bezel snaps off. 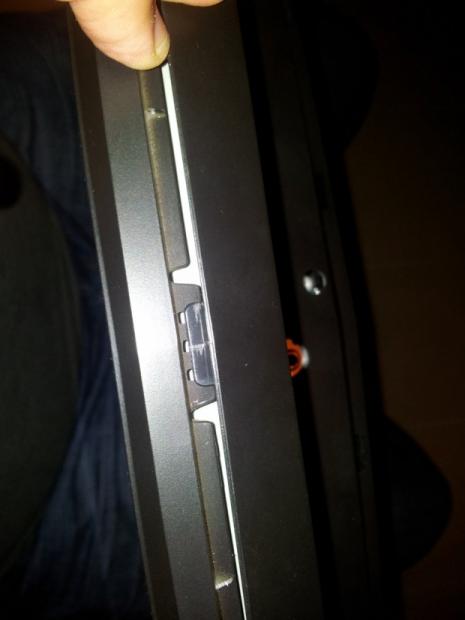 Another shot, this time up close, of the clip. 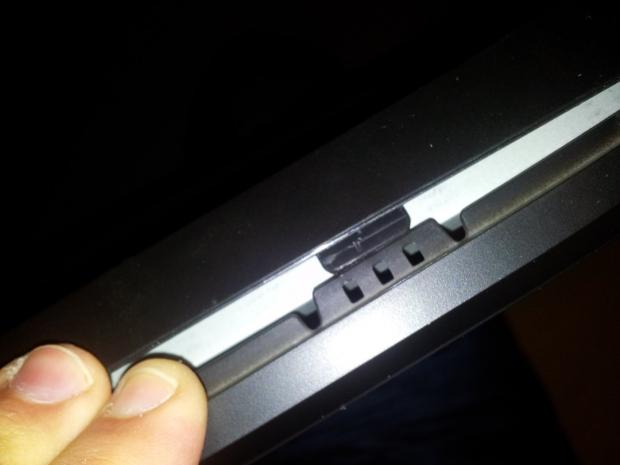 This shot shows you bottom of the screen and one of the larger clips to the left. They may look like they require a lot of work to unclip, but they don't. Again, just follow the clips around until they're all unclipped. 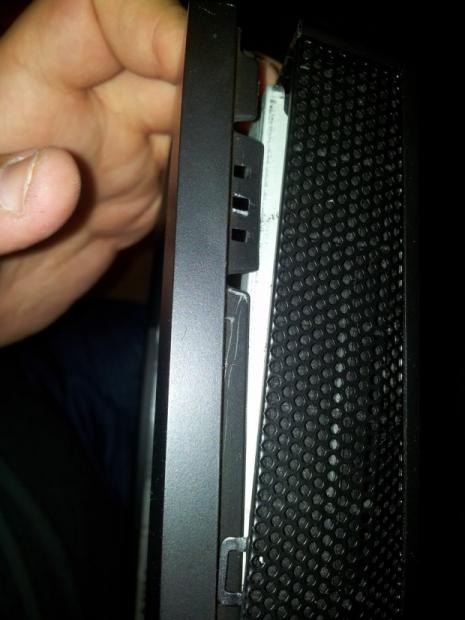 Once all of the clips have been disconnected, lay the screen front-side down on your table/desk. Once you've done this, you can pull the back off without a problem. This is what the back looks like without the bezel on. As you can see, it's all self-contained and nothing can be damaged (without really trying). 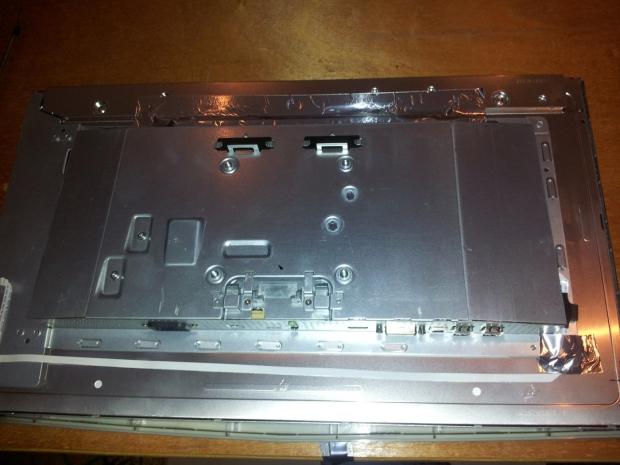 The next step is to flip the monitor over, onto its back and slowly take off the front bezel. DO NOT do this quickly, as the touch-sensitive buttons to the bottom-right of the screen are physically attached to the monitor through a cable. If you just yank the bezel off, you could damage this cable!

The front bezel you'll then slowly pull off the monitor and what I found easiest was to lift the monitor up and slide the front plastic onto the table. From here, you'll have the surround of the monitor's plastic, with its attached cable.

This cable is paramount - do not bend, disattach or damage it. I then got the plastic, which was now to the right of my monitor and sawed off the plastic at the edge of the buttons. I did this on both sides, which gave me around 10cm or so of control/plastic board, as shown below. 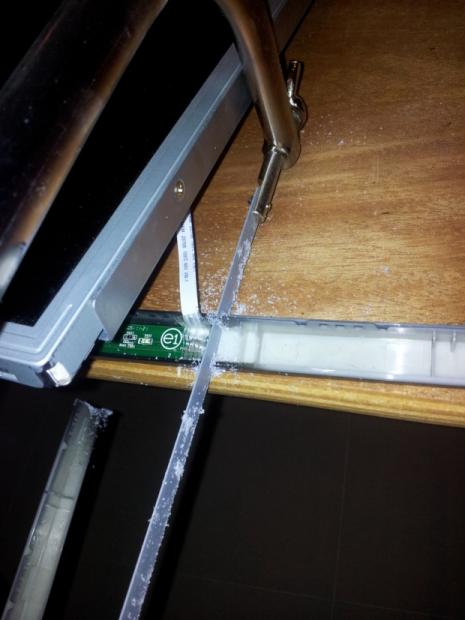 After you've sawed off this little bit, you'll be left with the plastic as shown below. You'll no longer need this I threw mine away. This photo came out blurry, I apologize for that. 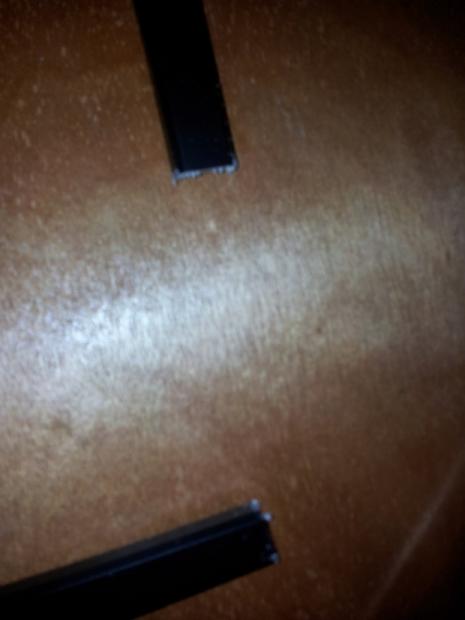 But, you'll have buttons remaining. I used some electrical tape (like the ghetto modder that I am) to attach this plastic button array to the back of my screen. My screens are all configured and I never need to touch those buttons. Once you've pressed them 'ON', you don't need to touch them again as they'll go into standby and turn on again when your PC turns on.

This is how I attached mine to the back of my monitor. 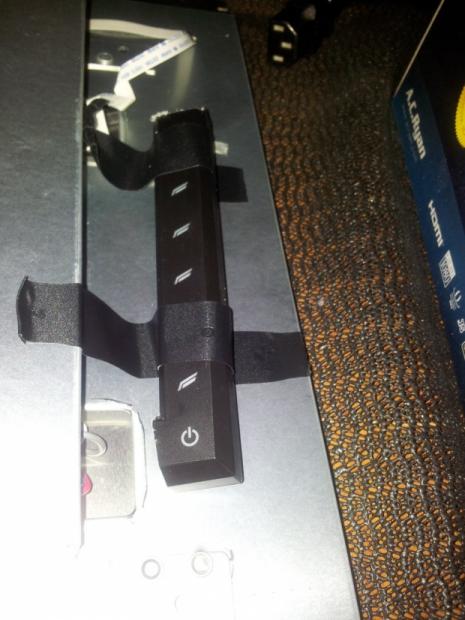 That's it! How easy is that! You're now done. All you have to do from here is be extremely careful holding the screen, as you've only got a centimeter or two between your fingers, the new bezel and the panel itself.

Before and after shots of the monitors in 3-screen portrait

How about a before and after shot? 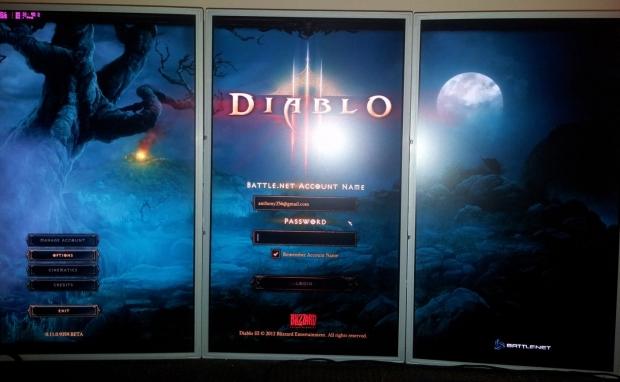 I hooked my monitors back up, lent them against my boxes to stabilize, turned them on and voila. Teased everyone with a picture or two on our Facebook page and now I'm done. Here are some things I noticed.

It's eleven-million times more awesome without the bezels. The screen real estate truly feels like a 4K monitor would feel like - much better than a single 30".

The bezels get HOT. This is something to note. I never ever noticed it before, obviously the plastic was helping, but they are very hot to the touch. Gaming is just pure awesome now - pure, pure awesome.

I've loved this venture and wish I had done it sooner. I really regret I didn't. But now that I'll be playing games more, I'll need to upgrade. My GTX 570's in SLI just aren't enough. Running something like Battlefield 3 at 3240x1920 with maximum AA, maximum detail and minimum 120 FPS would require dual NVIDIA GEFORCE GTX 690 video cards.

I hope you enjoyed our de-bezeling guide!