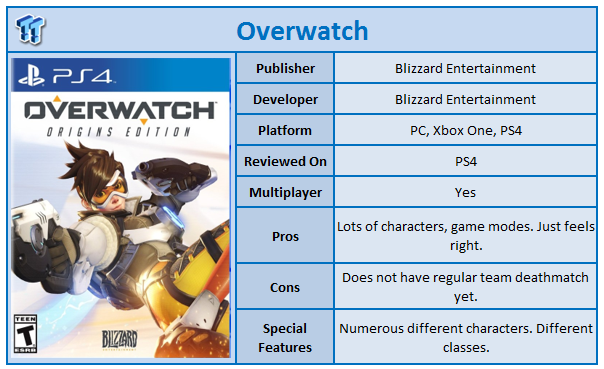 For years, it was rumored that Blizzard was working on a brand new MMO in follow-up to its smash hit World of Warcraft series. It was codenamed Titan and apparently a major overhaul of the MMO space, one that would continue to see Blizzard as the premier MMO developer globally. Some way through the project, though, apparently Blizzard decided it was not up to the quality and rather than go and scrap the entire project and universe they had created, they decided to try a different genre.

It was a risk. This was a genre Blizzard had never dabbled in before and their third/first person combat game; StarCraft Ghost had been canceled long before this time. Amazingly, despite their lack of experience in the space, Blizzard has produced one of the greatest team multiplayer games of all time, that even people who are not traditionally fans of the genre will probably warm to.

Despite being a multiplayer focused first person shooter, there is a decent plot behind the game, probably a result of it starting out as an MMO universe. The Overwatch name comes from the peacekeeping force that Earth put together after artificial intelligence threatened to wipe out the human race. With the war over, Overwatch remained in place but in times of peace they had not much to do and in the end corruption and other such vices became common within the forces until eventually it was disbanded. The forces have now returned, and while the war has not recommenced, the battles have. 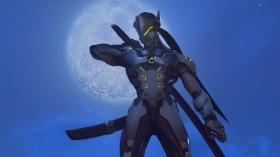 Overwatch is a team-based multiplayer shooter very much in the same vein as Team Fortress 2. There are different class types and which class type you end up playing, is determined by the character you choose. For success each team should have a balanced amount of each type although we do have to admit that Blizzard does seem to have balanced the game to the point where doing this is not crucial in 'public' games and you can still have fun. This is not a game where in our experience unless you are playing with a bunch of buffoons you will be accused of not playing your class or being told to 'get good.'

Every player is likely to find a class/character that they stick with long term, but the game does encourage you to change characters through each battle. Instead of being stuck with a character for an entire match, after each death, you can choose to change your character before re-entering the battle. This leads to a very fluid match where team strategies are ever-changing. It also leads to fewer people dropping out of games when the tide begins to turn against you (which players are punished for anyway). 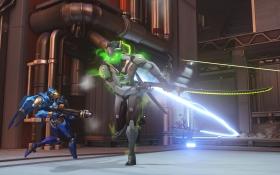 The game also has a leveling system although this does not affect character abilities. The reasons why that a level system exists is two-fold; first of all, each level unlocks a free loot box for you to open which contains random items such as skins and new voice options for characters. The second reason is to assist with Blizzard matching making you to other players of your level. Again, this is a master stroke by Blizzard because for those who cannot play often, you will not be punished by falling behind the curve and you have all abilities from the outset.

When you boot up the game, it may seem like the options on offer are very bare bone. The game gives you the choice of fighting in a quick match, playing against the AI (recommended to do this before jumping into any public games to get accustomed to the games mechanics), or to join a game mode which changes weekly and mixes up some of the rules to offer a different experience. However, the fact its barebones means that it remains very focused. Once you choose to start a game, it will search for a suitable game instead of presenting a browser. Again, this is a very intuitive system where you just indicate you want to play a game, and Blizzard does all the work for you.

While on the surface, the game reminds us a lot of Team Fortress 2 from Valve, it has definitely carved its own niche. It is a game that takes some of the concepts from the recently popular MOBA genre and applies them to first person shooters with everyone requiring to work together in different roles for success. The actual gunplay itself is incredibly satisfying, even with a controller and there is no doubt the time that Blizzard put into this game via its many closed beta periods, was worth it. It's hard to put into words why it does, but it just feels right. It has the type of feel that even if you are not the biggest fan of this genre, you just might find something to love here.

The game currently features 21 characters which considering it just launched is quite a wide variety. Each fall into a different type of role as well. For example, you have your tank characters who can take a real beating or the assault characters which move fast but are of the typical 'glass cannon' mold, in that they can delve out damage fast, but are easily defeated. These characters also vary significantly in look, and there is enough variety to keep anyone happy. Blizzard has already promised more characters down the line as well. 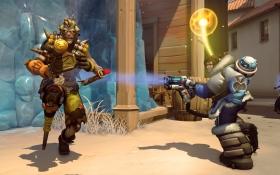 With the current shipping game, Blizzard has included twelve maps although not each game mode is playable on every map. The maps are set in various locales around the world and are strikingly different in the visuals department offering a wide variety. The maps are not overly complex and on those where you may find yourself getting lost, there is a handy little GPS style line to guide you to the objective. We found this not necessary, however.

There are currently four game types on offer; escort, control, hybrid, and assault. What we like about these modes is that they do not in any way encourage camping and instead rewards all-out assault. In general, there will be one team tasked with defending a point, and one team tasked with attacking it. In escort, for example, that point is continuously moving based on how well it is being defended meaning that the battleground location is always changing. At the time of writing, Blizzard does not have a straight out deathmatch style game mode in place nor team deathmatch, but the game does not feel like it needs it. 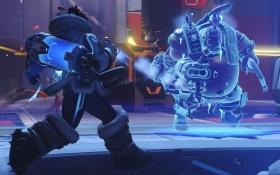 On the visuals side of things, the game looks gorgeous, to say the least with a cartoon style used which fits the characters and game world perfectly. It also runs near flawlessly on the PS4 with framerate hitches rare (so much so you probably will not see them), and the action kept up at a fast and frenetic pace. On the side sound, the wise cracks that the character's mutter fit the game well, although do not add much, and the soundtrack gets the job done.

For a game that allegedly came to be after another one was trashed, Overwatch is surprisingly impressive. It's a game that very much fits into the Team Fortress world but has carved its unique niche in the genre and one that is difficult to put down. Blizzard has possibly built a first person game that everyone can enjoy; it's easy to pick up, it rewards you quite often for playing, and encourages all out action. Quite simply, you must try this game.