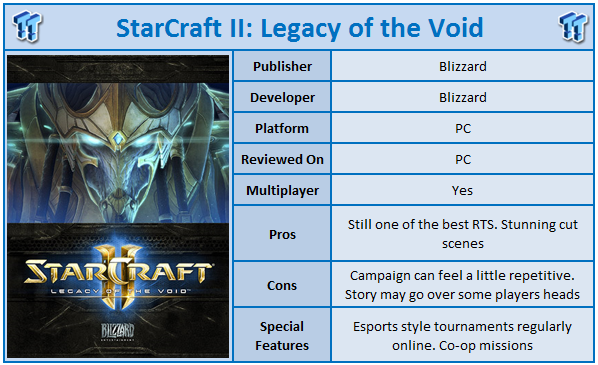 It's hard to believe, but StarCraft II was announced over eight years ago. After teasing fans of the series for numerous years, Blizzard finally announced the inevitable sequel and then did something no one expected. They split it into three games. Fast forward to 2015 and we have the final culmination of the StarCraft II series with Legacy of the Void, finally bringing the Protoss campaign to fans and wrapping up this epic saga. However, it's fair to say that gaming and the RTS genre has significantly changed in the last eight years, and the genre does not dominate like it once did, MOBAs have taken over. So, is this a game that a regular Joe can get into or is this one for only the true fans?

As expected, Legacy of the Void picks up after the events of Heart of the Swam. The Protoss (who the main campaign focuses on this time around) are close to discovering and completing the Xel'Naga. The Protoss begin their invasion of Aiur; a Protoss world abandoned after the invasion of the planet by the ever rampant Zerg. It is up to you to complete the Protoss legacy, rid the planet of Zerg, and fulfil the Protoss legacy once and for all (and wrap up the StarCraft II story along the way). 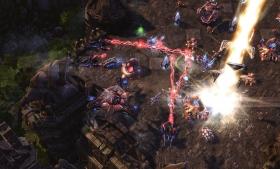 If you have never played StarCraft II and are coming to the series for the first time, it's very much worth your time playing the previous two games. Failing that, at least reading up about the events of the previous games, as to be honest, without that background, there will be a lot of the story that goes over your head. Even with that knowledge, you may find the story a bit of a chore to get through because it goes quite deep into the lore of the series and has numerous cut scenes where somewhat lengthy conversations take place. For those of you wanting to get even more out of the game, there are some optional scenes that can be played out as well, providing even more backstory to the events of the game.

StarCraft has always been known for the way that it mixes up the RTS genre's usual tropes, and it is no different in Legacy of the Void. Instead of just ploughing through mission after mission with basic tasks such as defeat the enemies on the map, Legacy of the Void offers you the chance to choose your path. As per the previous games, Legacy of the Void features a command deck where you can choose what to do next, be it travel to a distant world to find more missions or unlock new weapons and armaments for your forces. For Legacy of the Void, this takes place on the Spear of Adun, a Protoss super weapon that plays very heavily into the story. 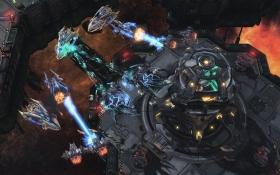 However, despite StarCraft's ability to mix up the RTS genre, there is a little bit too much repetition for our liking within Legacy of the Void. For many missions in a row, we were tasked with having to go and unlock keys, or defeat specific enemy units. This on paper does sound like variety, but it ends up being merely building up a force and moving from point to point on the map. That is of course how an RTS game typically plays out, but sometimes it's nice just to be tasked with crushing the other side. Every so often the game mixes the mission style up just enough to remain interesting, and the missions that include the hero characters are by far the highlight, as you would expect.

Along with this, there have been some changes to the game as well, with some coming as a bit unexpected. You now begin missions with more worker units which leads to a higher urgency to get bases and units built quicker. This makes the game quite a bit faster to play with most missions not stretching on for a lengthy period. Even if you do fail during a mission, the game will save at key checkpoints throughout, which encourages you to try different tactics without fear of losing significant amounts of progress.

Rather than introduce many brand new units, for the most part, the designers have modified existing units and either introduced new features to a unit (usually by replacing another ability) or flat out removed abilities from units. If you come to the game expecting a significant amount of brand new units and buildings to try different strategies with, you will come away disappointed. The focus on change is not just on the Protoss either with both the Terran and Zerg forces also receiving changes to many of their units.

The real draw for StarCraft II as always is multiplayer, and this is where Blizzard has implemented a lot of positive change to the series for Legacy of the Void. With the strong esports community associated with StarCraft, it is no surprise that work has been done on tournaments. The game now has what's called automated tournaments, where every so often (generally every 30 minutes) a new tournament begins online that you can take part in. These battles have time limits to ensure that tournaments are completed quickly. This is a really neat feature as it allows you to test your chops in a tournament style while not necessarily having to commit to being available at a specific time. 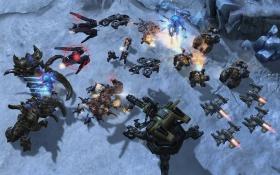 The other big change to multiplayer is the introduction of the Archon Mode where two players control the resources and building of a single base. This again is quite a significant change and freshens up the multiplayer and in some ways it slows things down because players cannot just go and build a base how they usually would - cooperation is key. Finally, the Allied Missions from the previous title have been renamed to Co-Op and as the name implies has you and a friend taking on campaign style objectives together. All in all, as expected, Legacy of the Void offers a very solid multiplayer game and the changes introduced, especially to the game modes, all make sense.

Although the series is now over five years old, the game is still punching very high when it comes to the visuals. It can run on a low-end machine (with various options disabled), but if you have the power, the visuals are gorgeous to say the least. Intricately detailed units and colourful world's await. Along with this, many of the game's cut scenes play out in-engine (meaning that your graphics settings will determine the quality of these), although key moments still play out in the stunning CG videos that the series has had really since the days of the original StarCraft. 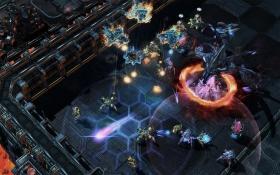 StarCraft II: Legacy of the Void does what is expected of it without revolutionising the RTS genre (it would be unfair to expect that in a series which is wrapping up its current trilogy) or completely altering the series. What it does add, especially in the multiplayer components, all adds to the game. And while some of the campaigns can feel a bit like a fetch quest, the missions that feature hero characters more than make up for it. If you are really into the lore of the game, you will find a lot here to like, while those who are ambivalent about the series may find it going over their head or find themselves not caring about the hundredth technical term thrown out of their speakers. A solid ending (for the moment) to one of the best RTS games of all time.