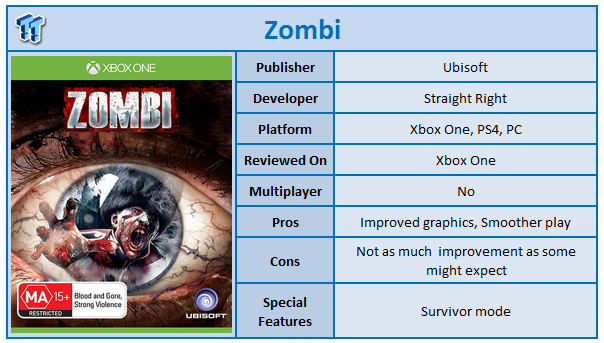 When the Wii U was first launched, there was one game (besides the usual Nintendo goodies) that grabbed the appeal of many of the early adopters, ZombiU. It was a game produced by Ubisoft to try and show the power of the Wii U as well as how unique the use of the gamepad when combined with gameplay could be. It turned out to be average at best and something that could have done with a little more cooking in the oven, so to speak. Fast forward a few years and the game has been ported to the next-generation console systems, including Microsoft's Xbox One. Does the additional power and lack of gamepad actually help the game, or was the Wii U's unique system the only way this game could play well? It's now time to find out.

Zombi is set in London after a mass outbreak of a disease that turns ordinary humans into zombies wanting to murder not only each other, but to take down the human race that is left as well. That said, aside from this setup, there really is not much of a story to speak of. The overall arc is to try and stop the outbreak and escape, but even that is light on story. 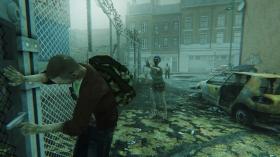 One key reason that a story does not exist is that every time you succumb to the zombie forces in London, you begin as a new character (or if you are playing the survive mode, forced to start the game all over again). It might be a cop, it might be a young girl, or it might be just a regular Joe who you end up playing as next. In some ways, Ubisoft missed an opportunity here by not customizing the movement speed or anything based on the random character generated, but at least does offer some variety. This is basically #YOLO in video game form.

It's also the game that in many ways first brought the concept of a corpse run to the mainstream. It did not invent it, but having to take down the character you were previously playing to gain all your items back is certainly one of the challenges of the game and one of the more enjoyable ones. You don't have to do this of course, but it's the easiest way to gain items back that had been lost.

On the next-generation consoles, this game is still hard as balls. It is a game that will challenge you and will frustrate you at times. For those who are not up for that, there is an option for easier difficulty and having played now both modes, it is significantly easier to progress in. The only problem is that Zombi is not the longest game around and certainly relies on its brutal difficulty to extend the life of the game. 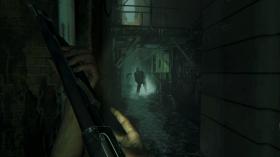 When we first played ZombiU, the gamepad seemed like a must have. However, as we progressed through that play through, it became apparent that looking down at the screen away from the TV was a recipe for becoming a zombie sandwich quickly. It did add to the tense nature of the game, but it probably will not surprise you to read that we did not miss the gamepad whilst playing on the Xbox One at all. The inventory controls are fine, and the challenge of keeping zombies away, whilst managing inventory (you can't pause the game), is still there. The only difference is that it's very obvious that you are about to be attacked. Perhaps that says it all about the Wii U system and the original game. Removing the gamepad does not actually harm the game, and in fact, some will actually consider it an improvement.

Like in the Wii U game, items and weapons are hard to come by and you may find yourself relying on the cricket bat more often than not. The zombies hit hard and the game, as previously mentioned, does pose a significant challenge. This is a game that is completely reliant on timing. Miss by just a bit and you are likely to end up hit or even worse. However, on the Xbox One, for some reason, we found the combat more smooth. The system can certainly handle what is happening on screen a lot better than the Wii U did, and does not skip a beat even when multiple zombies are present in a large open space with the rain tumbling down. 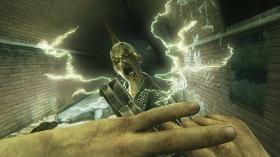 Visually, the game does look better than the Wii U game, but do not expect a completely rebuilt graphics system. The game holds a solid frame rate a lot more than on the original (possibly due to the lack of gamepad screen), and due to this, we found it a lot easier to get our timing right. ZombiU was not an ugly game by any stretch, but the port on Xbox One has had just a little sheen applied to it to make it look better. It is still a dark, foreboding game (unless you cheat by turning up the brightness), and one that when played in the dark will scare you many times over. Like on the Wii U system, the recreation of the London landmarks present is very well done. On the sound side, the port again has its cinematic soundtrack. It's generally quite obvious when something is about to happen because the music builds, but sometimes the scares and zombies will just occur. 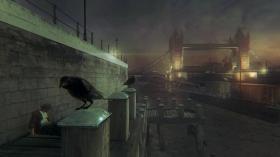 Zombi arrives on the Xbox One a couple of years after its debut and in some ways the time has not been friendly to it. Don't get us wrong, this is still a very solid action game that relies on its brutal challenge and fear factor to keep you playing. However, it does not improve the game significantly beyond what was offered. The improved frame rate and lack of gamepad is actually a bonus to the game, and being able to play on the one screen does make it a little bit easier. Whether you think that ruins the original ethos of the game is a decision for you to make, but at the bargain price it's being offered at, it's worth a look if you want a challenging title.