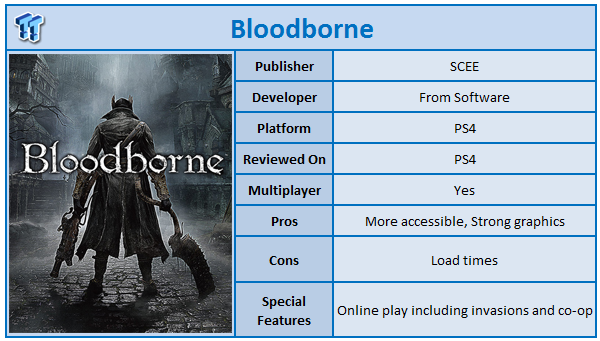 When it comes to surprise hits, I don't think you can underestimate how much of a surprise Dark Souls was. This was a game that actively punished players. That brutally challenged them to the point where you could lose hours of progress in a short spell of play. However, it was also a game that challenged players. Many gamers lament the lack of challenge in today's games compared to yesteryear, but Dark Souls brought that back with a bang. Sony saw the popularity and contracted From Software to build a game along the same lines, but with a few key mechanics changed. That game is Bloodborne, and if you liked the Souls games, then this is right up your alley. Even for those who rejected those games in the past, they may find this one a good entry point.

Bloodborne forgets the fantasy style castles and other locations from the Souls series and takes on a much more Victorian England look. Set in a fictional city called Yharnam, the city is rumored to have a medical fix for any ailment hunters have. The hunter (who you play as) arrives in Yharnam only to discover that instead of medical fixes, the city is rife with disease and plagues that has transformed all its inhabitants into powerful enemies. The main aim is to survive the night, to escape the town, but many enemies and bosses await - as you would expect. 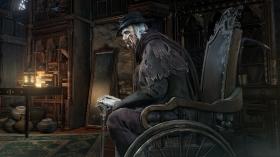 Bloodborne as per From Software's other titles is tough as nails. It is a game that will pound you time and time again, only to relent every so often. It is a game that you will play certain sections for hours on end trying to beat it, and despite all this, it is an amazingly crafted game that every PS4 player should try. This is a game where you will generally know the mistake you made, the thing that you should not do, and that is where the beauty lies. Every time you fail, you gain a little more information until you have enough to succeed. And succeeding in Bloodborne is reward enough with a strong sense of accomplishment achieved after each boss is taken down.

For those who have not played the Souls titles, the gameplay basically boils down to this; move from area to area taking out enemies gaining blood echoes whilst trying to find the boss character for that area. That said, the regular enemies are no walk in the park and you will not want to pull three or four at the same time. Whilst taking down the enemies, you collect Blood Echoes, which are used to level up, but you are also gambling with them. Should you succumb to the enemy, you lose all blood echoes currently held, and must return to retrieve them. However, should you succumb again before reaching the echoes, they are gone forever. You are always gambling with the blood echoes when exploring new areas and this fits the risk/reward mentality of the game perfectly.

Although the game remains brutally difficult, it is very clear From Software and Sony wanted this to be a little more accessible than Dark Souls. First of all, there is no weight, so you can carry around as much items as you want without impacting speed. There are also less weapons and in general each of the weapons is enough (when levelled) to finish the game with. The levelling system has been somewhat simplified as well, and one of our favourite changes is that when you succumb to the enemy, you no longer drop in maximum health. This is something that punished new players to the Souls series significantly in Dark Souls 2, so it's nice it is gone. Although we have played the Souls games in the past, we found BloodBorne a lot more accessible and easy to pick up, whilst maintaining the brutal difficulty it is known for. 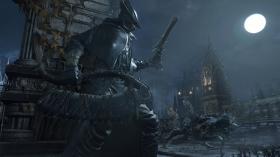 One of the riskiest and largest changes From Software put into the game was the introduction of guns and the removal of shields. This is very much a game where success is based on offensive measures, rather than defending (though that does remain important). Guns change the game somewhat, but are used more to stun enemies, instead of actually taking them out - and the damage inflicted by them is minimal at best. It is clear they didn't want to turn this into a third person shooter, and they succeeded with that objective.

In terms of the most important aspect of the game in many players' eyes, the bosses, the game offers a ton of variety. You actually are unable to level your character until you find the first boss (levelling up remains locked off), which trains you in how to play the game by having a very weak character against numerous enemies. The boss characters are as epic as ever (we won't spoil any), and before you finish the game, you will have to come up with a unique strategy per boss. Generally, once you figure out a strategy, they are easy to beat, but coming up with it may take hours on end to do. 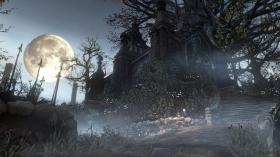 Despite all this, the game is not without its problems. First of all, the camera can be an utter pain in boss fights. Numerous times we lost to bosses because we jumped or ran into an environmental object we were unable to see due to the camera. To try and alleviate this, the game does include a lock on feature for enemies, however, there are times where its better not to use it. Once you get used to the camera and adjust your fighting style appropriately, it's fine, but it is very frustrating before then.

As well as this, the game has significant load times (around 45 seconds) after each death and to move between the Hunters Dream (where you level up) and back to the game world. It can also be buggy with enemies failing to trigger and also boss characters getting stuck outside the world. From Software has handled this the best way possible by giving you the victory, but when it happens, you feel like a bit of a cheat. To their credit, they have promised to try and patch the load times, and really, once you get used to it, it's not so bad.

Visually the game as you would expect is a significant jump over Dark Souls 2. The PS4 power is on full display with a stunning Victorian world present including some amazing architecture. Just like previously, no map is included, so you need to use landmarks to find your way around. The frame rate generally does not show any niggles and considering how important timing is in this game, that was crucial to its success. The scale of the enemies and environments really is a step above and the world is huge and easy to get lost in. 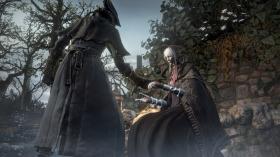 Multiplayer, like the Souls games, is both about invading other player's games (to become a nuisance and attempt to kill them) and calling for co-operative help. To do this, you need to get access to the various bells for invasion and this introduces a currency known as insight. As you discover new areas and defeat bosses, you will gain insight. If you leave this above particular levels, the game actually becomes harder. From Software clearly wants you to play multiplayer. Items can also be purchased with insight. As you traverse the world, if you are playing online, you can read messages from other players, which may help or hinder you.

Bloodborne may be based on an already existing series, but it does enough with mixing up the gameplay to keep it fresh. The fear about guns ruining the game was clearly unfounded and the stronger focus on attacks may make it easier for players to pick up. This is in our opinion the most accessible game of this year yet, however, if you are expecting a walk in the park, then you should look elsewhere.