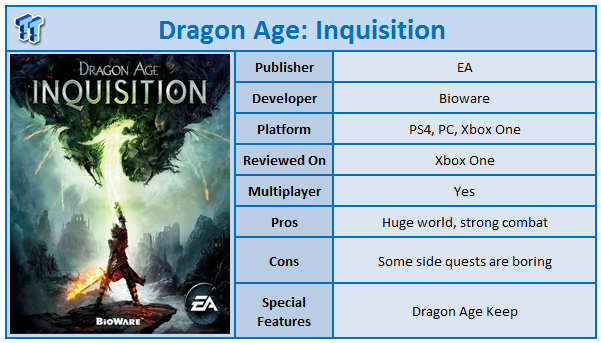 Bioware has had an interesting time of it lately. Mass Effect 3 ended off (for the moment) one of their best video game series yet, but had major criticism around its ending, so much so Bioware ended up rewriting it. Before that, Dragon Age 2 was taken to the cleaners by many gamers for being too different to the original, and it's been a little while since we've heard from the Bioware crew. The third Dragon Age game, Inquisition, has attempted to take what people liked about the original game, along with some of the mechanics from the second, meld them together, and come up with a game that every Dragon Age fan will love. You know what, Bioware may have just pulled it off. Dragon Age Inquisition is a spectacular game that RPG fans will play for months.

The game begins with the peace between the Magi and Templar factions being shattered by a large explosion which takes out members of the chantry who had brokered the peace deal. The land of Thedas is again on the verge of civil war with those who seek revenge and / or power able to now execute their plans. You play a Herald, a chosen character who builds a team of warriors known as the 'Inquisition'. Who you add to your party is entirely up to you and decisions you make directly affect this world as you play through the game with a number of crucial decision points present throughout. 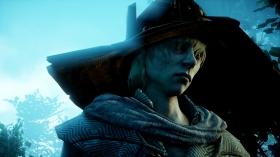 However, it's not just your decisions in this game that can determine the fate of this world. As part of the game, Bioware launched the Dragon Age Keep. This allows you to go to the Dragon Age site and enter the details from the previous games specific to your playthroughs and will directly affect how the world is when the game begins. The PC version can import the saves, however, the Xbox One version can download the data from the keep once you have set up your game in the Keep.

When it comes to the gameplay as per most Bioware games, there are primarily three sections; combat, narrative, and overall universe management. This is very much a game that mixes the combat up with some interesting narrative sections to play through. For example, without spoiling too much, there is a section where you need to perform a dance to impress a royal family. At times, when you think the combat is dragging on a bit, Bioware mixes it up with something new. Along with this, there is also a War Council that you need to convince to explore new areas, take on new missions, and find new mission objectives. To do this, you gain power by completing side quests or performing particularly well in conversation with key NPCs. 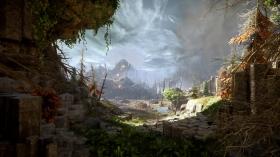 This is in some way where a few players will find some frustration with the game. Side quests are not really optional and are more mandatory to a degree. To gain power, you complete side quests and some of these, especially in the opening areas, are very MMO like. One such example is having to kill ten rams and return their skins. However, the rest of the game (and side quests further into the main structure) makes playing through these worth it. It is a real shame that some of the opening quests leave a bitter taste because the rest of the game is almost perfectly structured.

The combat itself can be played in two modes; either real-time or in a more tactical view. Which mode you take on is of course personal preference, but there are times in the game where the challenge is such that the tactical view becomes a must. In the tactical view, you can give commands to your non-player controlled characters (you can switch to these characters whilst the gameplay is frozen) that can lead to more co-ordinated attacks.

In the real-time mode, you can also do this, but it's a bit more frantic with less time to think. This is one area where Bioware has managed to meld the best of each of the previous games into something that should please everyone. One thing which really frustrated us and in some ways made no sense was the inability to get to the manage character screen during combat to change weapons - a small thing, but frustrating nonetheless.

The world the game is set in is massive. There are numerous areas to explore and more are found when performing tasks with the War Council. The opening area, the Hinterlands, has enough content for around ten hours of gameplay and that represents only a small area of the game. You will visit huge castles, forests, snow covered areas, and others before the epic story of the game wraps up. This is a game that if you do not rush, will take you around fifty to sixty hours to complete. And aside from the opening section if you get bored in one area, there will generally be many others to explore, gaining power and building the prestige of the Inquisition. 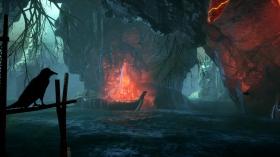 Visually, the game is stunning to say the least and really does show the jump between the old generation of consoles and what we have now. The combat is fluid and despite the huge open world's present, the Xbox One console manages to keep the frame rate quite solid throughout. At the start of the game, you can customize your character to a significant level, leading to everyone having a unique character. In an interesting move, when you move into a cut scene wearing a helmet, the helmet is removed showing the characters face. Small tweaks like this really bring home how much effort and care Bioware has put into this game.

The game also features multiplayer, and as you would expect, it's quite a bit different to the single player mode. Played with friends via co-op, the multiplayer mode puts a number of limitations on you as a character to ensure that you need to work together as a team for success. For example, you will have limited access to weapons and potions, and along with this, you can only succumb to the enemy three times before its game over - in single player, other NPC characters can revive you. 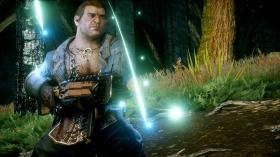 PRICING: You can find Dragon Age Inquisition - Xbox One for sale below. The prices listed are valid at the time of writing but can change at any time. Click the link to see the very latest pricing for the best deal.