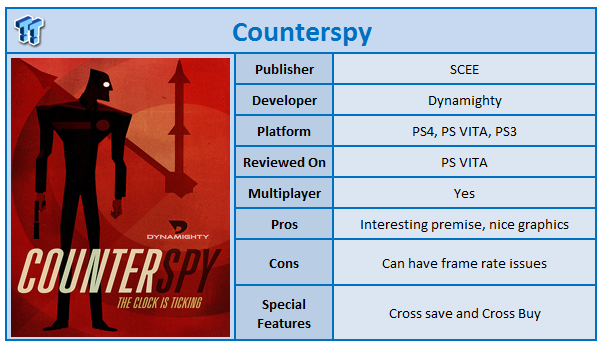 To say that the PS VITA is kicking goals as an indie gaming machine is to completely underestimate how much this market is driving the success of the console's success. Along with some assistance from Sony with initiatives such as cross buy, many of the most popular mainline console games are also being released on the handheld. The latest of which is Counterspy, the first game from indie studio Dynamighty and the latest to be offered under cross buy. An interesting premise, and solid previews, had us excited for this one, but the final product is unfortunately not without its issues.

In Counterspy, you take the role of a secret agent sent behind both US and Russian lines in the midst of the Cold War. Both superpowers are trying to send a rocket to the moon, which will inevitably destroy it. The humorous thing about this is that both super powers are planning the exact same military move, in the same way, with the same launch sequences. However, you have no idea when, how, or why, and uncovering this becomes your main task in Counterspy. 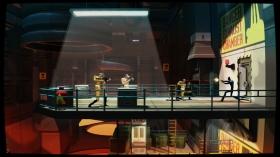 Counterspy is an action game that is set within a 3D style engine, but gives a very 2D feel during play. Primarily controlled from a side camera, you as the spy can hide behind objects and generally sneak about the environment, taking out enemies unheard. When the game begins, you have a DEFCON rating of 4, and as you are discovered, succumb to the enemy, or allow an enemy to call reinforcements in, that DEFCON level is slowly increased. 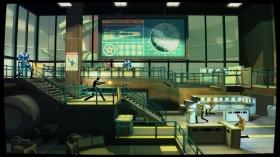 The interesting aspect about the DEFCON gameplay element is that it carries over between missions. So how you perform in one mission directly has a correlation with how wanted you are in the next. There are ways to reduce this level such as finding a captain alone and making them surrender, or buying formulas between missions to lower the DEFCON rating. If the DEFCON rating lowers enough, a panic is triggered, which means you as the spy have sixty seconds to end the level. This leads to a frantic race to the end of the mission trying to ensure the secret documents and cash you have picked up during the mission are not lost.

The actual missions are in general short and sharp. Most can be completed in about five minutes, even with the most meticulous of planning. This is clearly a game that Dynamighty feels you should play many times, as if you are connected online when playing, a challenge score is set on each map, and also the game is relatively short. The length of the game is set by how good you are at it. Manage to find many secret plans on each mission, and it will be over before you know it, but if you struggle to find them, expect a longer experience. We finished it after about three hours of gameplay, so don't expect this to be a lengthy experience.

This is where Counterspy somewhat begins to come unstuck. Each mission is randomly generated (aside from the very final map), and this basically leads you to restarting a mission over and over until a map you manage to complete is generated. This is not necessarily a major problem and does keep you coming back to it, but it also means that you can't plan out strategies to try and beat the mission. The random missions do increase the games longevity, but it would have been nice to see a mission 'locked' to a specific level design during the current play through. It leads to a feeling of the player being fortunate, rather than skilful, in completing some of the missions. 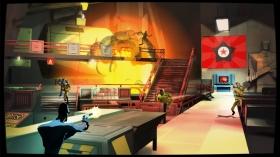 There are some elements in the game that do assist you in planning strategy, such as the store, which is present before each mission. Using the cashed gained in missions, you can buy new weaponry, as well as any formulas you have unlocked. These formulas might be lowering the DEFCON level or offering the spy more health for that single mission. Interestingly, these items are not lost when you fail in a mission, and are retained until you complete it.

One major problem, and this is more PS VITA specific, is that the responsiveness of the controls are not as tight as we would have liked. Often we would press circle to try and hide, only to end up barrelling down towards the enemy. We also played the game on the PS4 and did not experience this, so it's clear the VITA in some areas is struggling. As well as this, on the VITA, we occasionally experienced some choppy frame rates that again was not present in the PS4 version. 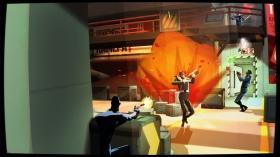 Visually the game is impressive on the VITA, but there are a few jaggies that really stick out when playing. There is also the aforementioned frame rate issues that need to be dealt with, but overall, Dynamighty has done a pretty good job. Again, this is significantly better on the PS4, as you would expect. There is no voice acting, instead the cut scenes play out in basic text dialogue on screen, whilst the soundtrack is very much that you would expect from a game set in the Cold War.

Counterspy was one of our most anticipated VITA games, and whilst for the most part it lives up to the hype, there is just enough here to have us cautioning you before a purchase. If you are the kind of gamer that cannot handle frame rate issues, or controls that can seem unresponsive at times, then this game is not for you on the VITA. However, aside from that, this is a solid title, despite the lower power of the handheld. If you have a spare few hours to play a VITA game, you could do worse than Counterspy.