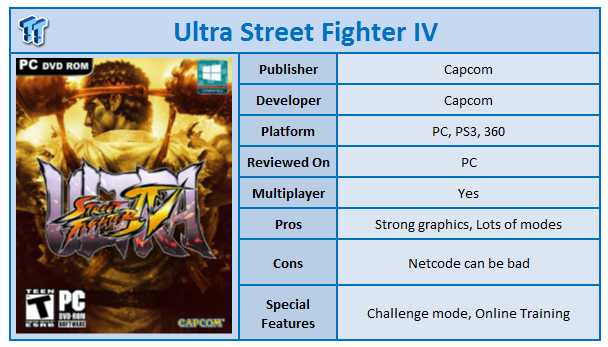 I'm probably not alone in that one of my first gaming memories is being taken by my friends to the local game outlet to play Street Fighter II at the arcade. It was that which introduced me to the famous series that is Street Fighter, and the second iteration still remains one of the most iconic video games of all time. Street Fighter IV has been and gone, and as is tradition, many different versions have been released after the main version. The latest (and apparently final) version of this is Ultra Street Fighter IV, a version which introduces new fighters, new outfits for the fighters and rounds off the SFIV series. Street Fighter IV has always been a solid game, but the Ultra version is not without its problems, especially on the PC.

Like its predecessors, Ultra Street Fighter IV has an overall story and one for each of the individual characters. In the arcade mode of the game, when you select a character to complete the story with, a few anime cut scenes play out, giving some background as to why this character is fighting. Some of these are incredibly cheesy and over the top, however, overall they fit the game well, and provide some much needed meat to the arcade side of the game for those who just want to play this game by themselves - which, of course, is generally not what SF is all about. 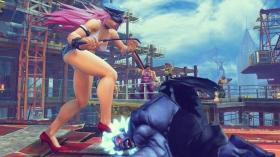 In terms of what has been added for the Ultra version, there are three main categories; characters, stages, and special moves. Ultra includes five new characters; Poison, Decapre, Hugo Andore, Elena, and Rolento F Schugerg. These characters seem loosely based on some previously existing characters with some of their special moves very much mimicking that of some long term stalwarts. Aside from characters, six new stages have been added to the game as well, however, the main change to the gameplay comes in the form of some new special moves. 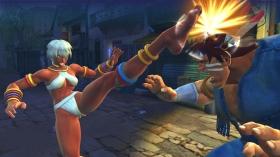 Ultra adds the ability for a player to select both Ultra combos a character can have (leading to a reduced damage impact), which changes strategy somewhat. In fact, a lot of the changes are very much aimed towards the very high level competition play. For example, one of the additions is the ability to change the way your character recovers from being knocked over. This, in theory, throws top players off their combo moves. If you are a typical Street Fighter IV player, then this is likely to not mean too much to you. You can now also choose the version of your character you wish to play as from the Street Fighter IV range.

From a PC perspective, this game runs very well, even on moderately powerful hardware. Given that this game is a last-generation console game, this is of no surprise, but in an interesting move before you can go online for multiplayer, the game benchmarks your system. That benchmark is then displayed to opposing players for them to decide if they want to play you. For example, if someone has an 'E' class system, they may not want to play an 'A' class system. It's quite a strange thing, but the assumption is that a lower powered machine will have a disadvantage, against a higher spec system.

One area where we did feel a bit disappointed was what we experienced of the netcode. The game in general does run quite well, but there were a few stutters here and there. Even when playing against someone in the local country, there was an indication that the connection was very poor, which was surprising - so, playing intercontinental tournaments or fights is likely not going to offer a good experience.

As well as this, it takes a while for the games to connect, and we found sometimes the games would just drop out before even finalizing the connection. 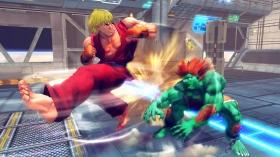 There are numerous modes to play in the game, ranging from the typical basic arcade mode through to training, where you can practice your move sets. On the multiplayer side of the game, there are even more modes, including the ability for players to form teams and fight in groups or again perform training online. On the single player side, there is the usual arcade mode, but also 'challenges' makes a return, which actually is quite a meaty game mode for a fighting game. It also helps you become proficient at the game, in some ways even more so than the actual training mode. 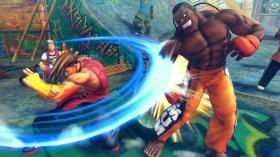 On the visuals side, Ultra remains a 2.5D game, but it is still a stunningly-beautiful game. Street Fighter IV has always impressed with its visuals, and Ultra is no different. The new characters are animated extremely well and fit into the visual style. The new stages are also visually impressive with lots of action going on behind the actual fight. It really is a 2D fighting game that looks like a 3D one. The cut scenes played through the arcade mode are also animated well, and presented in an anime style. The only thing about the cut scenes is that the voice acting comes across as very run of the mill and cheesy.

The fact is that if you are a big Street Fighter fan, it is likely Ultra is a no brainer for you, and it's also a no brainer for those who want a fighting game, and have yet to pick up a version of Street Fighter IV. However, for those who already have SFIV or Super SFIV, it is a harder sell. Some of the changes are specifically aimed at very high level play, and the new characters, whilst adding something to the game, are not exactly must have additions.

PRICING: You can find the Ultra Street Fighter IV for PC for sale below. The prices listed are valid at the time of writing but can change at any time. Click the link to see the very latest pricing for the best deal.