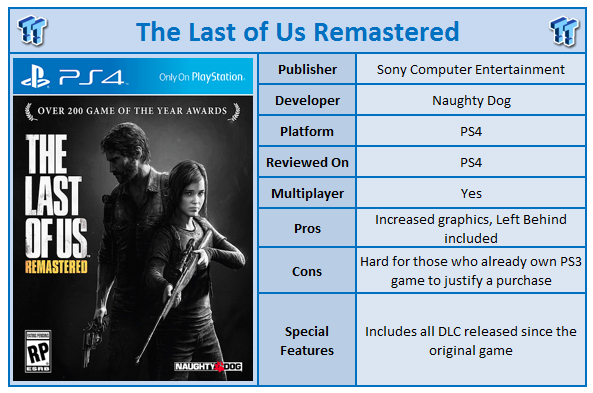 It's fair to say that Naughty Dog is one of the top tier developers from the house of PlayStation. Having built Nathan Drake and Unchartered as a premiere series for Sony, they took their hand to a new IP last year and achieved a major success. The Last of Us was an interestingly timed game with new IP generally reserved for the early period in a console generation, rather than just before its successor launches.

So, 12 months later, we're back taking control of Ellie and Joel again, only this time on the PS4. Naughty Dog has applied some finishing touches to the game and boosted it to sixty frames per second. With how good this has turned out, we do have to wonder why the PS3 saw this game in the first place.

For those of you who missed the game last year, The Last of Us tells the story of when a virus becomes uncontrolled in the United States and it becomes every man for himself in a fight for survival. You take control of Joel who lost a daughter twenty years prior to the main story of this game. He comes across Ellie, a young orphaned girl trying to survive, and from there the story winds through twists and turns till its epic end. 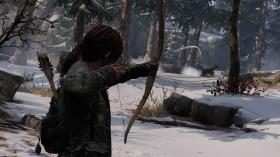 In terms of the story, nothing has changed for the remastered version, but there is some additional story included. Last year, PS3 players had to pay extra to gain access to 'Left Behind', but the Remastered product has it by default. Left Behind is one of the most impressive pieces of DLC ever made, offering around two hours of gameplay, which focuses on the harsh world that Ellie lives in, but also the innocence of youth. If you haven't played Left Behind, it's almost enough to pick up Remastered just for that.

Typically the game is played from a third person perspective much like Uncharted, however, this is not a game where you can go in all guns blazing. Stealth is the name of the game, and with limited supplies on offer, if you are not a fan of hiding in wait and attacking the enemies unknown, then this is very much not the game for you. This is not an easy game, especially in the higher difficulty levels (i.e. Crushing), but it is balanced in such a way that you never feel that the game is cheap and the sense of accomplishment when finishing a level is significant. 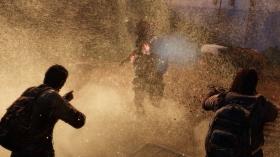 It is possible in certain areas to just get through an area without engaging the enemy. This is a game that can be played in many different ways, and it's likely when you encounter a tough section that you will need to work on a few strategies to progress. It's an incredible triumph of game design and proves that whilst ultimate it's a shooter, it's a shooter that has a high level of smarts, and solid design much like the Uncharted series.

Aside from Left Behind, the Remastered Edition brings some other treats for those playing through a second time as well. The game now runs by default at sixty frames per second (although the option to lock it to 30 like the PS3 is still there), and it really does have a significant visual impact. The game just seems to run better, which is to be expected given that it's on a new console system. However, it goes beyond this. It really adds to the game as well with many of the illegible signs from the PS3 build now viewable, adding even more atmosphere to the world. 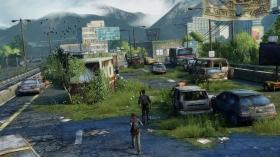 With this in mind, the brutal combat is of an even stronger level in the Remastered version. The impact of a pole smashing into an enemy's face is even stronger with the higher resolution graphics, and overall it just adds to the dog eat dog world that the game is set in. The PS4 controller is also used with some of the sounds emanating from the speaker on the PS4 controller. Along with this, the impact the season in which the game is currently taking place (there are four seasons overall) is of even greater significance. The improved visuals have also allowed Naughty Dog to increase visual fidelity, and in this case, the impact on the player. For example, in the winter season, visibility may impede some of your progress. 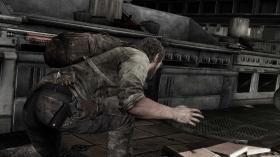 Perhaps unsurprisingly one of the most impressive facets of the Remaster is the graphics. It could have been easy to add a lick of paint and be done with it, but instead, it's clear that Naughty Dog has spent the interim going back and adding touches that they wanted in the original game, but did not have the power for before. The animations are as impressive as ever, but it does have to be say that the higher level graphics do expose some clunkiness in some areas. It's easy to look past this when the rest of the game is so impressive. The voice acting retains its special performance, and the cinematic soundtrack is untouched.

Along with the main storyline, Remastered also ships with the multiplayer component and all the DLC's released for it so far. The multiplayer in the Last of Us was unique in that it introduced a metagame where the Fireflies and the Hunters have to survive, and you do this by collecting supplies in matches, such as team deathmatch and interrogation, a cool mode where you have to interrogate enemies after capturing them.

The Last of Us was a stunning achievement on the PS3, and on the PS4, it shows even more what Naughty Dog has produced with this new IP. If you already played through the game on PS3 (especially if you have played Left Behind already), it certainly is something you need to think about before purchasing, but those who missed out the first time around will find out what everyone was raving about just over twelve months ago.

PRICING: You can find the The Last of Us Remastered PlayStation 4 game for sale below. The prices listed are valid at the time of writing but can change at any time. Click the link to see the very latest pricing for the best deal.

United States: The The Last of Us Remastered PlayStation 4 game retails for $49.94 at Amazon.

Canada: The The Last of Us Remastered PlayStation 4 game retails for CDN$49.96 at Amazon Canada.