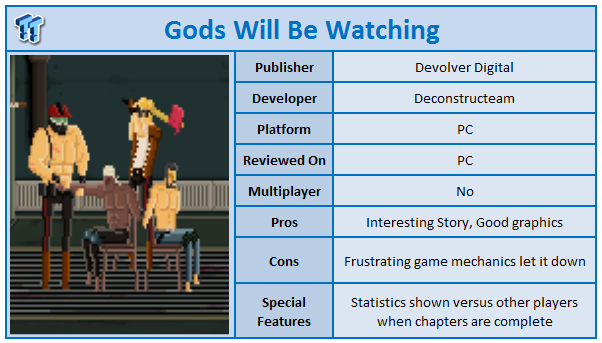 Devolver Digital has made a habit of picking up games from game jams and turning them into full products. They recently picked up Titan Souls and have released a few others. The latest of which is Gods Will Be Watching, a survival point and click adventure game that began as a popular flash game. Devolver saw clear potential in the idea and just under two years later, we have the final product, and in theory, the concept would work incredibly well as a game. It's just a shame that such a unique and interesting premise is let down by some poor game design decisions.

Gods Will Be Watching (GWBW) begins with you and a squad crew camped around a fire wondering where it all went wrong. You play as Burden, the leader of an intergalactic crew who end up in the middle of a major space war and in a fight for survival. Over the course of six chapters, you have to guide your crew through some harrowing times, and ultimately try to keep them all alive. That last part is what the goal of this game is. Keep as many people alive as possible, whilst retaining some semblance of humanity doing it. 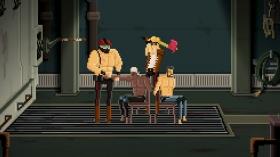 The main gameplay around GWBW is tough, moral decisions. At its core, it is somewhat like a point and click adventure, with time management mechanics thrown in, as well as a dose of tough decision making. Each chapter throws up a different challenge at you, and how you handle it will determine ultimately if you are successful, or you end up dead like the rest of your crew. This is a brutal game and one that quite frankly is as difficult, if not more so, than Dark Souls.

Each chapter throws you into a different situation, one which you need to become accustomed to before having any chance of success. The first few tries of each mission generally is about learning the mechanics and requirements of the level, before you finally put it all together and come up with a winning plan. Pen and paper will be sometimes required to solve the puzzles and come up with ideas, something that is quite rare in video games these days. If you are not a patient gamer, GWBW is most definitely not for you. However, in most cases, if you put the effort into learning the missions, the payoff is significantly rewarding once completed. 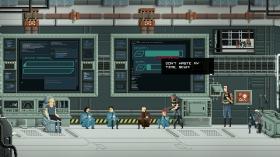 For example, in the opening chapter, you are holding hostages in a space craft, whilst the space SWAT crew storm in. You have four hostages as bargaining chips against the police incursion. At the same time, you need to complete a task of hacking the computer system and then escaping. You need to manage the hostages in many ways. For example, if you let a hostage become too relaxed, they may do a runner, forcing you to let them flee or shoot them. You can avoid this by shooting their knee to keep them in check. Of course, the flip side is that if you lose hostages either by fleeing or pushing their torture too far, the police become less likely to hold back. You can't just shoot everyone and expect to win.

And this is basically what GWBW is all about. Throwing you into tough chapters with increasingly tougher time management challenges. It's also a game that can become easier the more that you are willing to look past the inhumanity of some decisions. For example, in a mission where you need to keep everyone fed, killing a character not only will provide you with extra food for the squad, but also leave you with one less mouth to feed. It's brutal and you won't feel good about yourself, but there really is no winning in this game - survival of the fittest reigns.

However, as good as this sounds, and as interesting as this sounds as a premise, the developers have made some poor decisions in-game design that really hold it back. First of all, the chapters are quite long. Now this is not necessarily an issue other than the fact you cannot save your game and a fail means a complete restart.

Multiple times we had completed over twenty minutes of a chapter, only to fail, and have to restart it all again. This does lead to a sense of accomplishment once a chapter is completed, but wanting to put your first through the monitor during fail states is not conducive to fun gameplay. It could have been easily avoided with checkpoints. 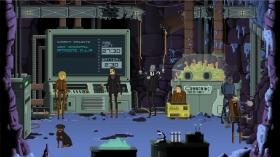 Then there is some of the actual design within the missions. Each time you start or re-start a mission, various parts of it can be mixed up (the game uses an RNG system). This obviously means that walkthroughs are pointless and that everyone's experience will be different, but it also exacerbates some of the issues with the game. In one such chapter, it is nothing but blind luck that you manage to finish it. We have no doubt that many people will stop playing at this chapter (5, for those who are familiar with the game), because no matter how good your strategy, you can still lose due to its random nature.

It's also not really a point and click adventure game, despite being touted as one. Instead, it's more time management. You generally need to manage characters stamina, health and abilities to complete each mission. If you come into this game expecting a point and click adventure, you are going to be horribly disappointed by what you find. It's not that P&C fans won't like the game, it's likely you will, but an adventure game, it is not. The decisions also in some ways are not as wide ranging as they could be. For example, if you choose to shoot a character, they still appear in later chapters, which somewhat completely breaks the whole 'your decisions count' feel the game is going for.

One area where the game does excel is in its visuals. The pixel art style really fits the themes of the game well, and it also means that those of you who do not have the most powerful systems around will be able to run this. Again, however, there is an area of frustration that comes into play here, and that is the UI. It is so ridiculously easy to accidentally select the wrong option and that could, for example, lead to instant failure. Pairing that with the lack of saves and it really can be game over very quickly. 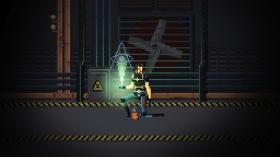 GWBW is a game that has a fantastic premise and intriguing gameplay mechanics that is ultimately let down significantly by some poor game design decisions. We see why they would want to not have a save or checkpoint system (increase tension, and make each decision count), but there has to be a better way than that which is currently present.

As it is, this game can really be only recommended to those with huge amounts of patience. If you have that, and are willing to put the time in, you will find a very interesting game. An update or two could alleviate some of these issues and really send this game to the heights that its unique idea could have very easily seen it at. As it is, it's worth playing, but be prepared for frustration.